Peacekeepers stood by as Christians, some armed with machetes and bows and arrows, swarmed into and picked apart houses in Bangui's northern PK12 neighbourhood 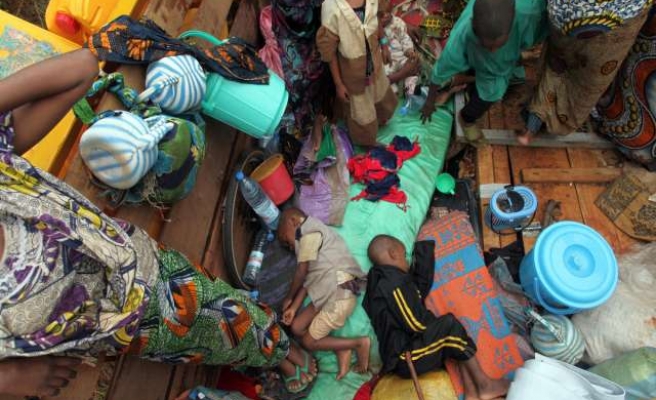 Peacekeeping troops escorted around 1,300 Muslims out of Bangui on Sunday, triggering looting and removing one of the last pockets of Muslims from the capital of a nation torn apart by religious violence.

Foreign troops have escorted thousands of Muslims to relative safety in the north of the Central African Republic. But some leaders fear that will make permanent divisions that have led to talk of partition after 18 months of conflict.

Peacekeepers stood by as Christians, some armed with machetes and bows and arrows, swarmed into and picked apart houses in Bangui's northern PK12 neighbourhood, which had been a Muslim stronghold in the majority Christian south.

"We are leaving to save our lives," Mohamed Ali Mohamed, who was born and brought up in the area, told Reuters as fellow Muslims tied jerry cans to trucks ahead of the trip.

Some of the departing Muslims torched their cars as they could not take them in the convoy but did not want Christians to be able to use them once they had left.

After watching their former neighbours leave, from behind a thin white rope barrier put up by Congolese peacekeepers, hundreds of Christians, including women and children, took part in the looting. Many chanted "Liberation, Liberation!"

Central African Republic's minister for reconciliation last week criticised the evacuations, warning they would play into the hands of Muslim rebels who want to create an independent state in the north.

Auguste Boukanga, president of the URD party which remained neutral in the conflict, echoed these concerns, calling on the 2,000 French and over 5,000 African peacekeepers to instead stick to their mandate of disarming the gunmen spreading terror.

Giuseppe Loprete, head of the local office of the International Organization for Migration, the U.N. agency involved in the evacuation, said Muslims living near the central mosque and in PK5, another Bangui neighbourhood, did not want to leave.

"We are working on social cohesion ... I'm not sure that they want to leave. Actually they told us they prefer to stay in Bangui," he said.

At least 22 people, including 15 local chiefs and three local members of staff of the medical charity Medecins Sans Frontieres, have been killed in an attack on a town in the Central African Republic, officials said on Sunday.

The attack on Saturday was in Nanga Boguila, about 450 km (280 miles) north of the capital Bangui.

Gilles Xavier Nguembassa, a former member of parliament for the area, said four people were killed as the assailants approached the town but most died when an MSF-run clinic was attacked while local chiefs were holding a meeting there.

"Fifteen of the local chiefs were killed on the spot," he told Reuters, citing witnesses he had spoken to. A spokesman for MSF confirmed the deaths of its staff but gave no further details.