Madagascar says will arrest former leader if he returns

Madagascar's major political parties signed the agreement that confirmed coup-leader Andy Rajoelina as interim president and allowed for the unconditional return of Ravalomanana. 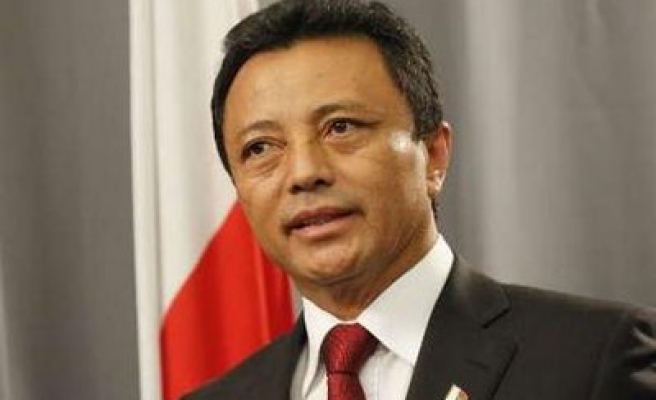 Madagascar will arrest exiled former president Marc Ravalomanana if he returns to the Indian Ocean island, a senior cabinet minister said a day after signing a road map aimed at holding elections within a year.

Madagascar's major political parties signed the agreement on Saturday that confirmed coup-leader Andy Rajoelina as interim president and allowed for the unconditional return of Ravalomanana.

"He will be arrested upon his return to the country," Justice Minister Christine Razanamahasoa told Reuters late on Sunday.

Rajoelina, responding to international pressure, accepted a clause demanding Ravalomanana's right to return that the opposition had insisted on. Rajoelina had previously said Ravalomanana could not return until the country was stable.

Exiled in South Africa since army helped topple him in 2009, Ravalomanana has been sentenced in absentia to life in prison for "the killings of demonstrators" by elite troops in the run up to his removal.

"We are going to call for the convictions against (Ravalomanana) to be scrapped because he was judged by an authority that does not have the competence to try a head of state," said Mamy Rakotoarivelo, head of Ravalomanana's delegation at the negotiations.

He was referring to the trial being held at a criminal court rather than a High Court of Justice as required by the constitution.

In a national address late on Sunday, Rajoelina said he had accepted the road map because it offered the only route to free and fair elections acceptable to both the Malagasy people and foreign donors.