Rockets fired at village near Timbuktu, one killed. Follows suicide attack in town of Tabankort. 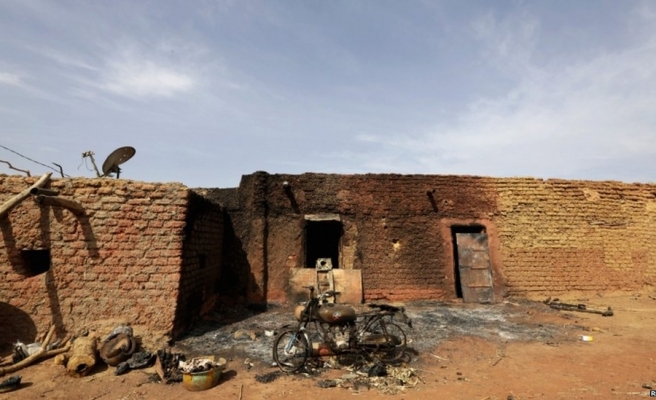 Two years after a French military intervention to drive out al Qaeda-linked from the desert north, sporadic attacks carried out by a medley of armed groups continue.

Tit-for-tat fighting between pro-government militia and Tuareg-led groups seeking greater freedom for a region they called Azawad has intensified in recent weeks. At least nine people, mostly rebels, were killed this week in a suicide attack near the town of Tabankort.

On Saturday, gunmen from the Tuareg separatist group MNLA and the MAA group of Malian Arabs encircled the village of Kano about 60 km (37 miles) east of Timbuktu and exchanged gunfire with pro-government fighters hiding there, according to two sources in the U.N. peacekeeping mission who asked not to be named.

They said one person was killed by a rocket fired from rebel forces. Separatist forces kidnapped at least 20 people at Kano, although they were liberated overnight after local authorities intervened.

The growing violence in the north of Mali, a former French colony, threatens to derail peace talks in neighbouring Algeria which aims to settle the decades-old question of the political status of the region.

The U.N., which is struggling to maintain order and carried out air strikes on rebel fighters at Tabankort in January, plans to hold a special meeting on northern Mali in Algiers on Feb. 5-6.

"Malian militia and agents of the state keep placing land mines and creating hate and disorder among the people of Azawad. We call on the Malian state not to sabotage the Algeria peace process," said Attay Ag Abdallah, spokesman for a pro-Azawad coalition called CMA. He confirmed the clashes but did not immediately comment on the reports of kidnappings or rocket fire.