Voters arrived early and long queues formed at many of the 21,000 polling stations across the Mali. 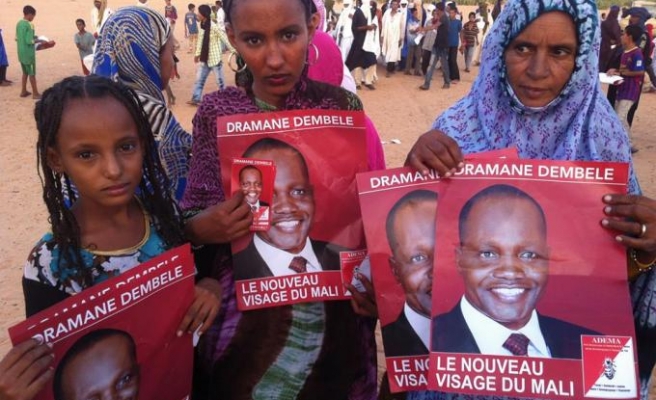 Voters in Mali headed to the polls on Sunday in a presidential election it is hoped will the provide a fresh start to a country divided by a coup and a war in its desert north.

Separatist and Islamist rebels swept across the desert north of the former French colony last year shortly after soldiers ousted the president.

Thousands of French troops halted a rebel advance in January and United Nations peacekeepers are deploying to stabilise the broken nation. A successful vote on Sunday would take the gold-producing country another step towards recovery.

"I love my country. I want change and security," said Nina Traore, 28, the first person to vote at a polling centre the Aminata Diop school in the capital Bamako's Lafiabougou neighbourhood.

Voters arrived early and long queues formed at many of the 21,000 polling stations across the Mali, from the bustling, lush riverside capital in the south to the remote desert garrison town of Kidal, which was at the heart of last year's rebellion.

However, the official 0800 GMT opening of polls was delayed in many voting centres as election workers awaited the last-minute delivery of voting materials.

"We need this election - it is critical," said Abdrahamane Toure, a postal worker who came to the Lafiabougou voting centre a day early on Saturday to check where he would vote.

"Once we have a legitimate state back, things might start getting better," he added.

In a sign of last-minute preparations, residents were still lining up to collect newly-printed ID cards that they will have to show in order to vote. Authorities also instructed some 6.8 million eligible voters how to find their polling stations by sending SMS messages to designated numbers.

Most of the front-runners are established political figures over the last 20 years of Malian politics so there is little likelihood of a radical overhaul.

Two former prime ministers - Ibrahim Boubacar Keita, known universally as IBK, and Modibo Sidibe - are expected to be among the top finishers.

Soumaila Cisse, a respected economist, former finance minister and native of the region of Timbuktu, is also among the leading candidates. Dramane Dembele, chosen as candidate of Mali's largest party, ADEMA, could appeal to youth voters.

In the run-up to the vote, experts had warned that a rushed election might lead to challenges and further crises.

But election officials say they have distributed 85 percent of the ID cards and a free and fair race in a field of 26 men and one women could take place. A second round will take place on Aug. 11 if no candidate wins over 50 percent of the vote.

Louis Michel, head of the European Union's election observer mission, said he was "positively surprised" by preparations and that the conditions for the vote were acceptable.

"A month ago, there were a lot of doubts. But it has come together. Everyone realises that this interim government has to end as its inherent fragility and uncertainty has been so costly for Mali," said U.S. Ambassador Mary Beth Leonard.

Before last year's collapse, Mali, a poor nation straddling the south of the Sahara, had built up a reputation for stability and become Africa's No. 3 gold producer.

Donors who slashed aid after the coup have promised more than 3 billion euros in reconstruction assistance after the election.

The new president will have to oversee peace talks with separatist Tuareg rebels who have agreed to allow the vote to take place in areas they operate in but have yet to lay down their arms.

France is hoping a successful vote will allow it to scale down its military presence in Mali from around 3,000 troops currently. A 12,600-strong U.N. mission is rolling out.

While there have been few counter-attacks by Islamists since they were scattered from their northern strongholds, MUJWA, one of the groups that occupied Mali's north last year, on Saturday threatened to attack polling stations.

"Places of the so-called election will be a target for the strikes of the Mujaahideen," Mauritania's Nouakchoute News Agency quoted the group as saying in a statement.

The group also warned what it called the Muslims of Mali against taking part in the elections and urged them to stay away.