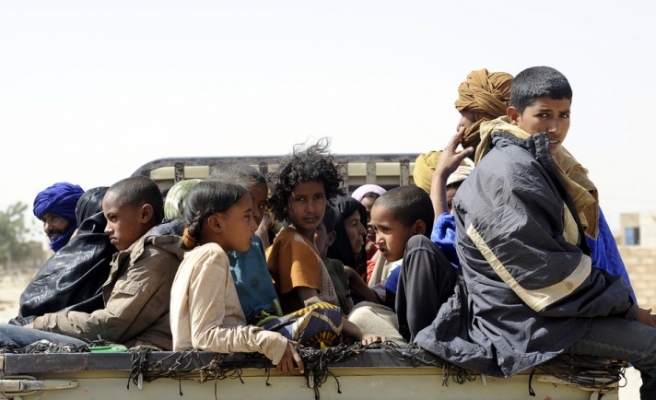 Malian troops clashed with Tuareg rebels in the northern desert town ofKidal for a second day on Monday, residents said, after the separatists ended a ceasefire with the new government last week.

The clashes threaten to derail peace efforts in northern Mali and complicate France's plan to reduce its troop presence in the West African country following a military operation that destroyed an Islamist enclave.

The fighting began on Sunday afternoon outside a bank in the centre of Kidal, with both the military and the MNLA rebels accusing the other of firing first. After calm returned overnight, shooting re-started early on Monday morning.

"The firing began at around 5 o'clock (0500 GMT) this morning between the army and the MNLA," saidMohamed Toure, a trader. "I have not opened my shop today."

Colonel Souleymane Maiga, an army spokesman, said the shooting erupted outside the Malian Solidarity Bank (BMS) where fighting raged on Sunday. The MNLA said three of its fighters were wounded in Sunday's combat.

On Friday, two soldiers were wounded in a grenade attack at the same place, a day after the MNLA suspended its participation in the peace process. The rebels accuse newly elected President Ibrahim Boubacar Keita of failing to honour a June ceasefire accord.

The agreement had committed Mali to opening talks on greater regional autonomy for the north within two months of a new government taking office. Keita won an Aug. 11 presidential run-off by a landslide with a pledge to reunite the impoverished former French colony.

The clashes in Kidal followed a suicide car bomb attack near an army camp in the northern town ofTimbuktu on Saturday in which the two attackers and at least two civilians were killed.

In a statement to Mauritania's Alakhbar news website, which has contacts with groups, a spokesman for Al Qaeda in the Islamic Maghreb (AQIM) - its north African wing - claimed responsibility for the suicide attack.

In Kidal, a resident who asked not to be identified said the Tuareg rebels had brought arms and fighters into the town overnight. The combatants were loyal to local chieftain Iyad ag Ghali, he said.

Ag Ghali founded Islamist group Ansar Dine, one of three armed Muslim militant factions that seized control of the northern two-thirds of Mali last year following a military coup in March. The coup had been triggered by the government's failure to tackle effectively a Tuareg revolt last year.

Ag Ghali's whereabouts has remained unclear since France launched a ground-and-air operation in January that broke the control of the al Qaeda-linked groups over the sparsely populated desert region.

A military official, who also asked not to be identified, confirmed that Iyad Ag Ghali's forces were entering the town.

Last week, a source close to the political talks had said that Ag Ghali's men had camped some 40 km (25 miles) from Kidal.

France, which had more than 4,000 troops involved in Operation Serval at the height of the conflict, aims to have just 1,000 soldiers deployed in Mali by year end as a rapid reaction force to respond to any terrorist threat.

The deployment of a 12,600-strong U.N. peacekeeping force, meanwhile, is being hobbled by a lack of aircraft and troop commitments from member states