Gunfire and shelling echoed sporadically across the divided capital as pro-Saleh troops and protesters clashed on Monday. 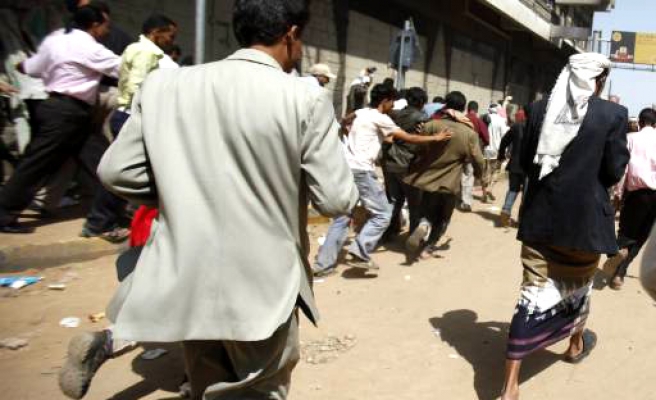 Yemeni security forces killed 21 people, some shot by snipers from rooftops, in a crowd of demonstrators on Monday in the worst bloodshed seen since March against a protest movement demanding the removal of President Ali Abdullah Saleh.

Medics said a further 113 protesters were wounded in the capital Sanaa, a day after 26 demonstrators in a massive anti-government march were shot dead.

Gunfire and shelling echoed sporadically across the divided capital as pro-Saleh troops and protesters clashed on Monday.

"Help me, oh my God look at this slaughter!" said the father of a boy who died from a gunshot wound to the head.

"We were just in the car on Hayel Street (near the fighting). I stepped out to get some food and left my two boys in the car and I heard the older one scream. The little one was shot straight through the head."

Government troops were firing into the air to scatter demonstrators, according to witnesses. But a Reuters reporter saw snipers shooting from rooftops and upper stories of buildings into the throng of demonstrators. Some of the deaths appeared to have been caused by rocket-propelled grenades.

Injured people were whisked on motorcycles to a makeshift hospital in protester-dubbed Change Square where people have been camped for eight months calling for an end to Saleh's 33 years of repressive rule in the poor Arabian Peninsula state.

Yemen is politically paralysed as Saleh, now being treated in Saudi Arabia for wounds suffered in an assassination attempt, clings to power despite mass nationwide protests.

"I fear the situation will get out of hand. There is no new initiative to cool things off and the other political players doubt that Saleh will abide by any terms that are set," said Saadaldeen Talib, a former Yemeni opposition parliamentarian.

Abdullatif al-Zayani, head of a bloc of wealthy Gulf neighbours of Yemen, was expected to arrive in Sanaa later on Monday to try again to win acceptance of a Gulf plan for a transition of power away from Saleh that the president came close to accepting on three occasions, before backpedalling.

Monday's violence erupted as protesters tried to push further into areas of Sanaa controlled by government forces after extending their camp overnight to a junction known locally as Kentucky Roundabout.

Abdulwasia Dahnai, 39, said as he lay on a hospital floor awaiting treatment: "We marched to Kentucky Roundabout. I heard gunshots from above, looked up and could see gunfire coming from the building. Next thing I knew I felt a gunshot in my side."

The area had previously marked the dividing line between parts of Sanaa held by loyalist troops and defected forces.

"The thugs are hurting our brothers. We will go, the road is open. The free men will meet at Kentucky Roundabout!" organisers shouted over loudspeakers in Change Square.

Earlier on Monday, troops belonging to defected General Ali Mohsen, who threw his support behind the anti-Saleh movement some months ago, blocked the protesters' efforts to advance, in an apparent attempt to defuse the situation. Some Mohsen soldiers were among the injured at the hospital.

The new bloodshed, shredding a weeks-long stand-off, was the worst in recent months. Hundreds of people were wounded too when security forces fired on protesters who charged police lines.

In Geneva on Monday, Yemeni Foreign Minister Abubakr Abdullah Al-Qirbi said Sunday's bloodshed would be investigated and perpetrators would be prosecuted.

In a speech to the U.N. Human Rights Council, he said: "The government of Yemen expresses its sorrow and condemnation for all acts of violence and bloodshed as those that happened yesterday in Sanaa. The government will investigate and hold accountable all those in charge of these acts."

Sanaa for months has been split between Mohsen's breakaway troops and Saleh loyalist forces in a maze of checkpoints, roadblocks and armoured vehicles that many worry could quickly tip inflamed tensions into military confrontation.

Protesters on Monday managed to extend the territory of their camp by around one kilometres after hundreds slept there overnight. Ali Mohsen's troops entered the area and were fortifying it with sandbags.

The new staked-out area brought protesters and troops backing them within 500 metres of Ahmed Ali Saleh, the president's son and head of the Republican Guard units loyal to the government.

"I will go back out today once the doctors check the wound," said Dhuyazen al-Shiah, 23, whose eye was bandaged after bullet fragments hit his face in Sunday's clashes.

"I do this because I was tired of living with no dignity. I worked as a smuggler through Saudi Arabia because I couldn't find a job here. I am committed to this now. I'll keep going and either succeed or I'll die."

"Those who have been protesting peacefully for change are increasingly frustrated by the political deadlock.