The United Nations has warned that the conflict in the landlocked former French colony risks spiralling into genocide. 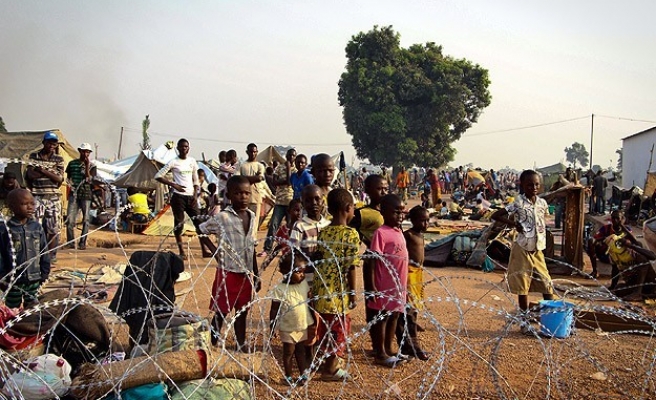 The United Nations is asking donors for more money to fund African Union peacekeepers trying to end inter-communal violence in the Central African Republic, a U.N. official said on Friday.

Almost a million people, a quarter of the population, have been displaced by fighting between Muslim Seleka rebel group and Christian militia. At least 2,000 people are estimated to have been killed.

"It is a critical situation. We have seen massive violations of human rights and violations of international humanitarian law," U.N. Deputy Secretary-General Jan Eliasson told Reuters, speaking on the sidelines of an African Union summit.

The United Nations has warned that the conflict in the landlocked former French colony risks spiralling into genocide.

One focus of the conflict on Friday was the town of Sibut, a gateway to the north of the country. Seleka fighters arrived there mid-week.

"They (Seleka) have regrouped in Sibut. They are armed elements who have lost power and are trying to reconfigure," said the aid worker, adding that the situation could lead to a de facto partition of the country.

In a possible sign of this, an unidentified group said it was forming a new body, the Independence Movement of northern Central African Republic.

The group's aim is to protect the interests of that region in the face of oppression and neglect, according to a statement published on a local news website on Friday.

Its veracity could not be independently confirmed but Peter Bouckaert, emergencies coordinator at Human Rights Watch who is currently working in the country, said it could be authentic.

Eliasson said the priority was to support the African force, known as MISCA, adding that a trust fund set up to finance it had "only slightly over $5 million". He said he had no set target for a meeting of donors in Addis Ababa on Saturday.

MISCA has more than 5,000 soldiers in the Central African Republic, where a 1,600-strong French force is also deployed.

The European Union, which has promised to send 500 soldiers, said on Friday it was ready to put 25 million euros ($34 million) into the MISCA fund and provide another 20 million euros for the country's electoral process.

MISCA aims to raise the number of troops deployed by March to about 6,000, an African official said, the current ceiling for the force, although France has said more are needed.

Eliasson said the number of peacekeepers needed would depend on political progress, helped on this month when a transitional assembly elected Catherine Samba-Panza as interim president.

"This situation cannot be solved only by a military or peacekeeping operation," Eliasson said.

He said fund-raising was hard, given a host of demands on donors, including the latest $6 billion U.N. appeal for Syria.

African Union director of peace and security El Ghassim Wane said MISCA had 5,300 troops on the ground and expected 700 from the Democratic Republic of Congo for a total of 6,000. Rwanda, Burundi, Chad, Cameroon and others have already sent troops.

"I can assure you that by the end of the programme in March we will have all troops on the ground," Wane told Reuters.

The World Food Programme, a U.N. agency which has provided food aid to 220,000 people displaced by the crisis since the start of the year, also appealed for more money on Friday.