The images showing a phalanx of officers opening up with automatic weapons on a small group of men in blankets and t-shirts, rekindled uncomfortable memories of South Africa's racist past. 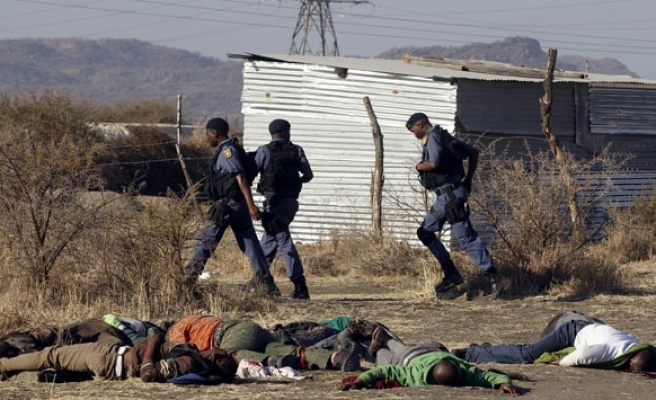 The killing by police of more than 30 striking platinum miners in the bloodiest security operation since the end of white rule cut to the quick of South Africa's psyche on Friday, with people and the media questioning its post-apartheid soul.

The images, along with Reuters television footage showing a phalanx of officers opening up with automatic weapons on a small group of men in blankets and t-shirts, rekindled uncomfortable memories of South Africa's racist past.

After over 12 hours of official silence, police minister Nathi Mthethwa confirmed at least 30 men had died when police tried to move 3,000 striking drill operators armed with machetes and sticks from a rocky outcrop at the mine, 100 km (60 miles) northwest of Johannesburg.

"A lot of people were injured and the number keeps on going up," he said in an interview on Talk Radio 702.

One radio station caller likened the incident, at Lonmin's Marikana platinum plant, to the 1960 Sharpeville township massacre near Johannesburg, when apartheid police opened fire on a crowd of black protesters, killing more than 50.

In a front page editorial, the Sowetan asked whether anything had changed since 1994, when Nelson Mandela overturned three centuries of white domination to become the first black president of the continent's biggest economy.

"It has happened in this country before where the apartheid regime treated black people like objects," the paper, named after South Africa's biggest black township, said. "It is continuing in a different guise now."

As dawn broke, hundreds of police patrolled the dusty plains around the Marikana mine, which was forced to shut down this week as a rumbling union turf war that has hit the platinum sector this year boiled over into violence.

"There were no problems over night. The problem is the hill over there where the shooting took place. I am not sure what will happen today," said Patience, a woman who lives in a shanty town near where the shooting place. She declined to give her full name.

Prior to Thursday, 10 people - including two policemen - had died in nearly a week of fighting between rival unions at what is Lonmin's flagship plant.

The London-headquartered company has been forced to shut down all its South African platinum operations, which account for 12 percent of global platinum output.

South Africa is home to 80 percent of the world's known platinum reserves, but rising power and labour costs and a steep decline in the price of the precious metal this year have left many mines struggling to stay afloat.

Although the striking Marikana miners were demanding huge pay hikes, the roots of the trouble lie in a challenge by the upstart Association of Mineworkers and Construction Union (AMCU) to the 25-year dominance of the National Union of Mineworkers (NUM), a close ally of the ruling ANC.

"There is clearly an element in this that a key supporter of the ANC - the NUM - has come under threat from these protesting workers," said Nic Borain, an independent political analyst.

President Jacob Zuma, who faces an internal ANC leadership election in December, said he was "shocked and dismayed" at the violence, but made no comment on the police behaviour.

"We believe there is enough space in our democratic order for any dispute to be resolved through dialogue without any breaches of the law or violence," he said in a statement.

Crime scene investigators combed over the site of the shooting, which was cordoned off with yellow tape, collecting spent cartridges and the slain miners' bloodstained traditional weapons - machetes and spears.

Firearms were also recovered at the scene, they said, supporting police reports they were shot at first.

AMCU leaders have been criticised for telling the striking miners - many of whom are barely literate - that they were "prepared to die" rather than move from their protest hill.

Pre-crackdown footage of dancing miners waving machetes and licking the blades of home-made spears also raised similar questions about the habitual use of violence in industrial action 18 years after the end of apartheid.

"This culture of violence and protest, it must somehow be changed," said John Robbie, a prominentJohannesburg radio host. "You can't act like a Zulu impi in an industrial dispute in this day and age."

World platinum prices spiked nearly 3 percent on Thursday as the full extent of the violence became clear, and rose again on Friday to a 5-week high of $1,450 an ounce.

Lonmin shares in London and Johannesburg fell more than 5 percent to 4-year lows, bringing their losses since the violence began a week ago to nearly 20 percent.