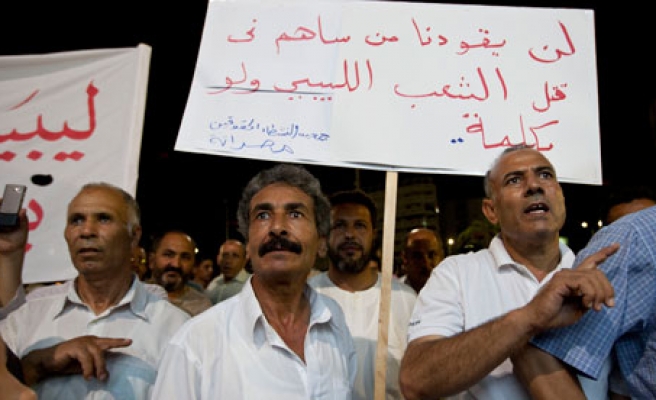 Protests erupting in Misrata against the reported decision of the National Transitional Council (NTC) to appoint a former Gaddafi henchman as security boss of Tripoli, according to the report by British paper the Guardian.

According to the local media reports, the NTC prime minister, Mahmoud Jibril, is poised to appoint Albarrani Shkal, a former army general, as the capital's head of security.

Protests erupted in the early hours of the morning in Misrata's Martyr's Square, with about 500 protesters shouting that the "blood of the martyrs" would be betrayed by the appointment.

Misrata's ruling council lodged a formal protest with the NTC, saying that if the appointment were confirmed Misratan rebel units deployed on security duties in Tripoli would refuse to follow NTC orders, the Guardian reported.

Misratans blame Shkal for commanding units that battered their way into this city in the spring, terrorising and murdering civilians.

But Misratans believe that prior to that, he was operations officer for the 32nd brigade, whose overall commander is Gaddafi's son Khamis.

The brigade took the leading role in a siege that saw tanks and artillery bombard residential areas of the city, murdering several hundred civilians.

Mr Jabril, whose NTC executive installed itself in Tripoli over the weekend, says he wants to build an "inclusive" administration. He appears to have the tacit support of London, with the defence secretary, Liam Fox, telling al-Jazeera it was important the NTC avoided excluding members of the former regime.

According to the Guardian report, behind the protests is a wider grudge between Misratans and the NTC, which many accuse of representing Benghazi rather than Libyans as a whole. Misrata's military council continues to refuse to follow orders from NTC army commanders, and some rebels complain that Misrata's units and those from the Nafua mountains, to the west, have not been recognised as having been the key to the fall of Tripoli.

"We won't follow his [Shkal's] orders, no," said Walid Tenasil, a Misratan fighter returning to garrison duty in Tripoli. "Our message to the NTC is: just remember the blood. That is it."

Misrata's protests pose a potential security problem for the NTC because it has come to rely on Misratan rebel units holding strategic points in the capital.