At least 62 people have been killed since Sunday when frustration boiled over at Saleh's refusal to accept a mediated power transfer plan. 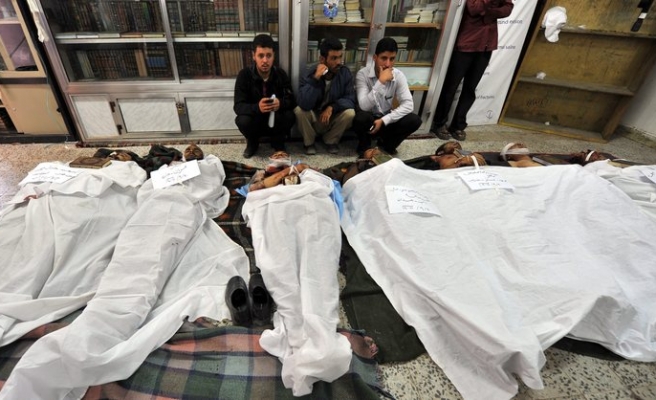 Raging battles between heavily armed loyalists and foes of Yemen's president killed six people in the capital on Tuesday as a crisis over his violent crackdown on popular unrest drifted towards civil war.

At least 62 people have been killed since Sunday when frustration boiled over at President Ali Abdullah Saleh's refusal to accept a mediated power transfer plan after suffering serious wounds in a June assassination attempt.

That has turned the violence prevalent in a eight-month-old street revolt against Saleh from shooting at protest crowds increasingly into a military showdown between forces loyal to him and troops and tribes who have defected to the opposition.

Heavy shelling and machinegun fire buffeted Sanaa before dawn on Tuesday and unidentified snipers lurked in the upper stories of buildings in the teeming capital Sanaa.

Four defector soldiers were killed in street fighting with pro-Saleh forces and two civilians died when three rockets crashed into a protest camp just after morning prayers at around 5 a.m. (0200 GMT), witnesses said.

"The rockets hit some men walking outside past a market. I have two dead," said Dr. Mohammed al-Qubati, director of a field hospital at the camp on a site which protesters have dubbed Change Square. He said 10 people had been wounded.

"We were walking back from prayers. All of a sudden a rocket hit close by from out of nowhere, and some people fell down. And then a second one came and that's when we saw the two martyred," Manea al-Matari, a protest organiser, told Reuters by telephone.

More than 400 people have been killed since anti-Saleh protests began in January, one of a string of pro-democracy revolts in the Arab world that have toppled autocratic leaders of Tunisia, Egypt and Libya and challenged Syria's power elite.

Saleh and his extended family have ruled impoverished Yemen on the southern end of the Arabian Peninsula for 33 years.

Tuesday's shelling was centred on the base of defected General Ali Mohsen and street fighting later spread for the first time to a wealthier neighbourhood, Hadda, that is home to both senior government officials and leading members of the powerful al-Ahmar tribe that is aligned with the protesters.

It was unclear who started the fighting in Hadda.

A witness close to the protest camp said Yemen's Republican Guard forces had dug in on a mountain on Tuesday and started shelling Mohsen's First Armoured Division compound. The protester camp may have been hit by stray projectiles, he said.

Crowds flocked to the sites of the blasts that killed the two protesters. Stones were laid around a dark pool of blood near a metal storefront that was ripped open. Around the corner, tattered shoes lay scattered next to a patch of blood.

At the field hospital in Change Square, the wounded were carried in on blood-streaked stretchers while doctors sought to make room for more casualties.

Protesters thronged the streets on Tuesday and initially headed towards the "Kentucky Roundabout", an area where they have been trying to extend their reach, but were forced to turn back by fighting between government and Mohsen forces.

An organiser of the street protesters said the retreat was a tactical one and they would try again soon. "We're not afraid. We're just waiting for the right moment," he told Reuters.

Government forces on Monday responded to escalating street marches with heavy fire, while snipers shot at activists from rooftops, according to Reuters witnesses.

Mohsen's forces clashed with pro-Saleh troops on Monday, though it was unclear who started the fighting.

Mohsen, a top Yemeni general, dealt a major blow to Saleh when he and his troops defected after a March attack on demonstrators by security forces that killed 52 people.

Government officials denied on Monday that soldiers were targeting protesters and blamed the bloodshed on the opposition.

A high-ranking ruling party official dismissed claims talks were under way with the opposition to broker a ceasefire, saying government forces had acted in self-defence.

"There are spoilers on both sides who are not looking for a compromise or maybe aren't getting what they want from a compromise," said April Longley Alley, senior analyst Arabian Peninsula at the International Crisis Group in Abu Dhabi. "Maybe they feel they could achieve more by escalating right now."

Diplomats, struggling for months to help the opposition and government reach a political deal, have feared rising tensions in the capital of the impoverished Arabian Peninsula state could deteriorate into open military conflict.

Diplomats and Yemeni politicians were scrambling to salvage a long-stalled transition plan under which Saleh, recuperating in neighbouring Saudi Arabia from the June attempt on his life, would step down, yielding to a reform process.

A source in Yemen's political opposition said members were meeting government officials and diplomats to try to push through a deal. U.N. mediator Jamal bin Omar and Gulf Cooperation Council Secretary General Abdbullatif al-Zayani arrived in Sanaa on Monday and were expected to join the talks.

Zayani was expected to press for the signing of a Gulf-brokered transition plan which Saleh backed out of three times before. "There's a possibility of trying to push through the Gulf plan for signing this week," an opposition source said.

Several countries including the United States condemned the violence but have given little indication of how they planned to put pressure on Saleh to relinquish power.