A spokesman for Congo's government said an investigation had been launched into the situation but health problems that people face across Congo, rather than poor management at the camp, were most likely to be the cause of the deaths. 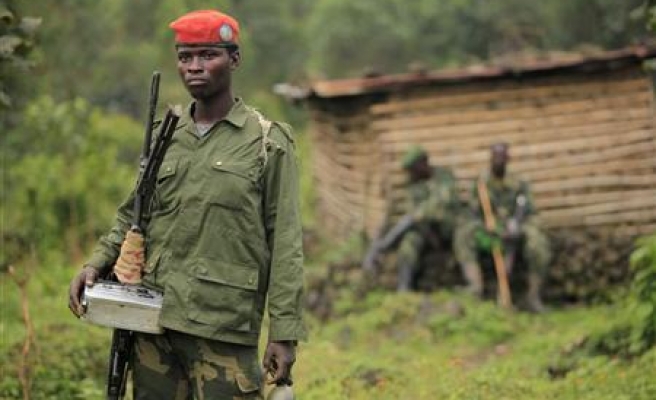 More than 100 people died from starvation and disease over the last year in a government-run camp set up to house former rebels and their families in Democratic Republic of Congo, Human Rights Watch (HRW) said on Wednesday.

The group said the deaths were likely to discourage other insurgents still fighting government and U.N. forces in the east from signing up to any future programmes to persuade them to disarm and settle.

A spokesman for Congo's government said an investigation had been launched into the situation but health problems that people face across Congo, rather than poor management at the camp, were most likely to be the cause of the deaths.

According to HRW, 941 former fighters and several hundred of their family members were sent to the Kotakoli camp, in the remote forests of northwestern Congo, in September 2013.

Since December, 42 ex-combatants and at least five women and 57 children living there have died due to extreme shortages of food and medicine in the camp, HRW said.

"The Congolese government's neglect of these former fighters and their families is criminal," said Ida Sawyer, HRW's senior researcher in Congo.

"If they didn't have the resources and the capacity to provide regular food provisions and health care, they shouldn't have sent them there in the first place."

Sawyer added that government officials had failed to heed warnings about the dire conditions, including from the commander of the camp, which lies 100 km (60 miles) along a decrepit road from the nearest town.

One ex-combatant in Kotakoli told HRW that the residents looked like "the photos of the famine in Somalia and Ethiopia".

The former fighters hail from various eastern Congo armed groups, including the M23 rebel group, which was defeated in November 2013 in joint operations by U.N. and Congolese forces.

According to HRW, Alexandre Luba Ntambo, Congo's deputy prime minister and minister of defence, said donor hesitation to fund a new disarmament programme had made it difficult for the government to either look after those living in the camp or move them.

Government spokesman Lambert Mende accused HRW of failing to put the deaths in the context of health problems faced by people across Congo, a vast nation that has endured two decades of near constant conflict and political strife.

"They try to make people believe that Congo is killing its own people, simply to discourage the World Bank, which is preparing to come to the rescue of our (disarmament) program."

The report comes as Congo's government is trying to launch a new disarmament program targeting other fighters in the east, especially the FDLR, a Rwandan Hutu militia that has been given until the end of the year to lay down its arms.

"I think it sends a really bad message to all the other combatants who are still in the bush with their armed groups," said Sawyer. "They're unlikely to if they think they're going to be sent somewhere where they won't be fed or treated with basic human decency."

HRW also urged the U.N. peacekeeping mission, MONUSCO, to play a bigger role in the process.

A U.N. spokesman said that while the mission was not involved in the running of the camp, it had dispatched officials to Kotakoli to study how MONUSCO could help Congolese authorities improve conditions for ex-combatants.