Morsi's supporters who staged protests, marches and human chains in different parts across this country 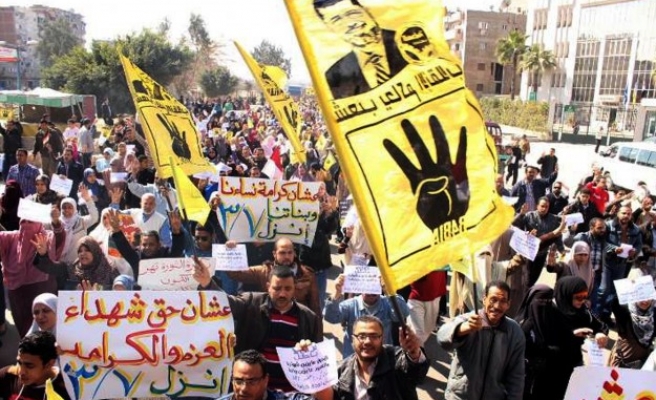 Supporters of ousted president Mohamed Morsi on Saturday staged a series of activities against the current authorities, deprecating what they described as deteriorating economic conditions and commodity price hikes.

Morsi's supporters who staged protests, marches and human chains in different parts across this country, including in the capital, Cairo, and other cities, chanted slogans against the Egyptian army and policemen and called on President Abdel-Fattah al-Sisi to leave.

The National Alliance for the Defense of Legitimacy, Morsi's main support bloc, had earlier asked its followers to stage a partial strike on Saturday as part of what it called a "new revolutionary wave".

Apart from complaining against price rises and poor living conditions, the demonstrators called for the return to power by Morsi, who was ousted by the military on July 3 last year.

Former army chief Abdel-Fattah al-Sisi, widely seen as the architect of Morsi's ouster and subsequent imprisonment, was declared winner of a presidential poll held in May. Since Morsi's ouster almost 14 months ago, Egypt's military-backed authorities have waged a relentless crackdown on his supporters – and on other political dissidents – in which hundreds have been killed and thousands detained.

The Egyptian government has blamed Morsi's Muslim Brotherhood group for a series of deadly attacks on security personnel that have come in the wake of Morsi's ouster – allegations the group insists are politically motivated.