The Strong Egypt Party condemned "a repressive security apparatus that has not learned from its past mistakes." 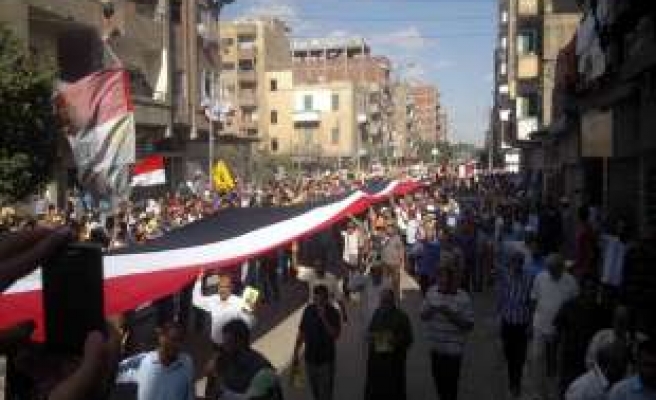 Some political opponents of ousted President Mohamed Morsi have spoken out against the killing of the latter's supporters on Sunday, the day Egypt celebrated the 40th anniversary of its 1973 military victory over Israel.

"Opposition to ousted president Morsi and participation in protests to demand his removal on June 30 does not mean approval of the killing of his supporters," Khaled al-Masri, spokesman for the April 6 youth group, told Anadolu Agency.

At least 54 pro-democracy protesters were killed by security forces on Sunday. Demonstrators had staged rallies and marches countrywide to denounce the army's July 3 ouster of Morsi, the country's first freely elected president.

"We are opposed to the idea of staging protests on the October 6 war anniversary so as not to spoil a national day, but when people think otherwise and protest on that day, this is by no means a justification to kill them," al-Masri asserted.

"We participated in the June 30 protests [which the army used to justify Morsi's ouster three days later] to demand snap presidential polls. But we cannot remain silent to the aggression against protesters and the [government-imposed] emergency measures," added the youth activist.

The Strong Egypt Party, for its part, also condemned "a repressive security apparatus that has not learned from its past mistakes."

In a Monday statement, the party said the security apparatus was becoming "more violent, repressive and bloody under a fascist cover [provided] by the authorities and the media."

"Egypt has never seen anything like this before," the strongly-worded statement read.

Most of Egypt's pro-army political parties and groups have kept their silence in regard to Sunday's bloody events.

Many of them confined themselves to simply condemning the Muslim Brotherhood for "spoiling" the national holiday.