Hundreds of people died when security forces clashed with protesters in the weeks before Mubarak was forced from power in February 2011. 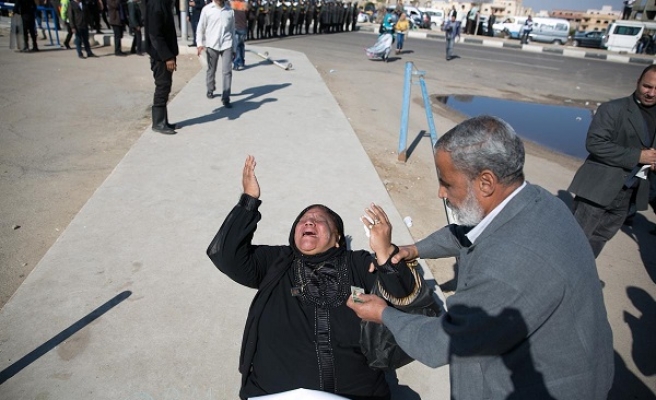 An Egyptian court decision to drop murder charges against former president Hosni Mubarak and top security officials has been greeted with shrieks and cries from families of protesters killed during a 2011 uprising.

Denouncing the court verdict, families of the victims shouted slogans demanding retribution for people killed in the revolution that ended Mubarak's 30-year rule, according to an Anadolu Agency reporter.

Some of the families fainted following the ruling.

"This is a political verdict. The judiciary has been procrastinating for four years so they could clear him after hope had been lost," the father of Ahmed Khaleefa, 19, who was killed in 2011, told Reuters outside the court.

"The verdict hit us like bullets. I consider that my son Ahmed died today."

Othman al-Hefnawy, a lawyer representing some of the families of the protesters who died, said the verdict left open the question: if Mubarak, his interior minister and their security aides were not responsible for the deaths of 239 protesters, then who was?

The court later ordered a retrial, however, after the former president's lawyers successfully the sentence.

Many Egyptians who lived through Mubarak's rule view it as a period of autocracy and crony capitalism and considered it a victory to see him behind bars.

His overthrow led to Egypt's first free election but the winner, Mohamed Mursi, was ousted last year by the army. The release of some Mubarak-era figures since then and a series of laws curtailing political freedoms had already raised fears among activists that the old leadership was regaining influence.

Mubarak says he committed no crimes

Hosni Mubarak said he had not committed any crime, in his first remarks following a court decision to drop charges against him of complicity in the killing of demonstrators during a 2011 revolution.

In a phone interview with the private Sada al-Balad channel, Mubarak said that he was surprised when a popular uprising erupted against him in 2011.

"I have not committed any crime," said Mubarak, who was forced to step down in 2011 following an 18-day uprising.

Mubarak declined to accuse the United States or any other country of masterminding the revolution against his regime.

"I can't speak about what happened over the phone," Mubarak said in the interview, his first since his ouster in 2011.

Mubarak said his first reaction to the 2012 ruling was to scoff.

"I was waiting for the verdict in the retrial on Saturday," Mubarak said. "It did not make any difference anyway," he added.