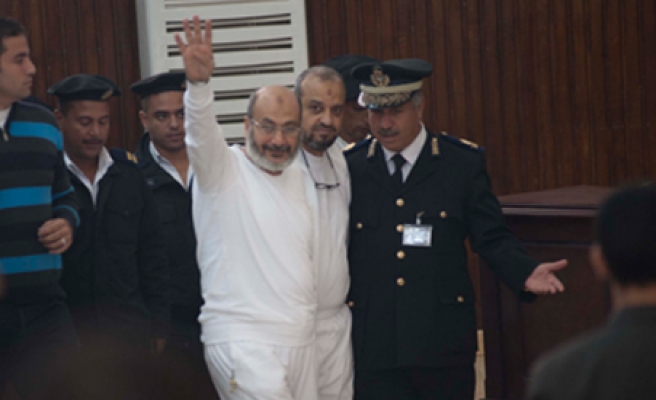 An Egyptian judge sentenced the leader of the Muslim Brotherhood and 25 others on Sunday to three years in jail for insulting the court, a day after charges were dropped against ousted president Hosni Mubarak over the killing of protesters.

The Brotherhood's general guide, Mohamed Badie, is among hundreds of the group's members who have already received death sentences and lengthy jail terms in mass trials criticised by Western governments and human rights groups.

Coming on top of those verdicts, Sunday's ruling was made during the trial of more than 100 Brotherhood supporters on charges related to the storming of prisons during the popular uprising that ousted Mubarak in 2011.

The judge, Shaaban al-Shamy, decided to punish the defendants after a number of them began chanting "void, void" in response to some of his remarks.

The unusually harsh penalty for court-room rowdiness was handed out shortly after another Egyptian court dropped its case against Mubarak over the killing of protesters in the Tahrir Square revolt that ended his 30-year rule and raised hopes of a new era of political openness.

Many Egyptians who lived through the rule of former air force officer Mubarak view it as a period of autocracy and crony capitalism.

His overthrow led to Egypt's first free election, but the winner, Brotherhood official Mohamed Mursi, was ousted last year, after protests against his rule, by Abdel Fattah al-Sisi, another military officer who won a presidential vote in May.

Egyptian authorities have since jailed Mursi and thousands of Brotherhood supporters. By contrast, Mubarak-era figures have been released and new laws curtailing political freedoms have raised fears among activists that the old leadership is back.

Mursi, who was among those being tried, was not punished by the judge as he did not take part in the chanting.