With rebels now in control of much of Tripoli, symbols of Gaddafi's 42-year-long rule are being erased fast throughout the capital. 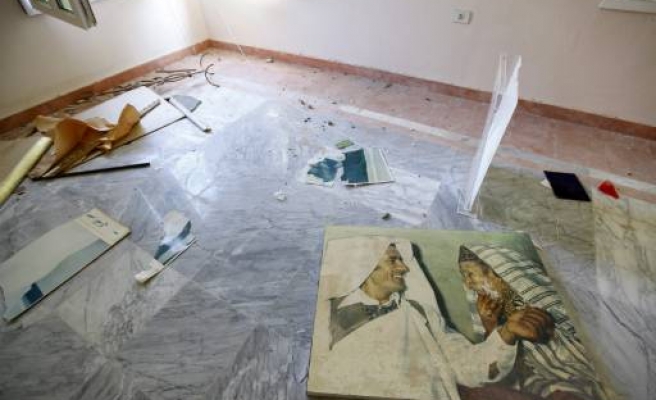 Its ransacked grounds strewn with private photos of Muammar Gaddafi, a luxury villa in central Tripoli is the latest vestige of his fallen rule to be pillaged by angry mobs.

The opulent compound in the upscale Gargur district was bombed by NATO in April in what Gaddafi allies said at the time was an attempt to kill their leader.

Its iron gates now broken and wide open, the once top-security villa was abandoned and looted when Reuters visited it on Saturday.

Framed Gaddafi portraits, torn apart and stamped on, littered the lawn outside the main building.

An armoured vehicle peppered with bullet holes was parked at the gate. Inside, broken furniture filled lavish rooms with arched hallways. Chairs and men's clothes floated in a vast indoor swimming pool.

Music from an electronic toy filled the corridors with a Beethoven tune.

An assortment of what looked like private family photos depicting Gaddafi surrounded by family and allies were strewn on the grass outside the house. Some were ripped into pieces.

One photo showed a younger Gaddafi smiling alongside Moussa Koussa, his former close lieutenant who defected to the West shortly after the rebellion began.

Heaps of rubble, spent cartridges, machinegun belts, broken toys and glass were scattered around. An empty bottle of Gold Label whisky was left on the steps of the house.

Local residents said crowds broke into the compound after Tripoli fell to rebels this week.

"Some people came here and did this," said a Gargur resident, Moussa Zintani, 37, a real estate businessman. "It was a huge blast. Shrapnel flew everywhere," he said of the NATO strike.

Another building, ruined in the strike, stood nearby, a mangled mess of concrete and wire rods.

The government took journalists to this location in late April saying Gaddafi was inside the building at the time but survived. His youngest son and three grandchildren were killed, officials said.

With rebels now in control of much of Tripoli, symbols of Gaddafi's 42-year-long rule are being erased fast throughout the capital.

Rebel checkpoints have sprung up around the sprawling city of two million but a sense of lawlessness, coupled with food and water shortages, has gripped the capital.

Gunfire rings out sporadically, most shops are closed and streets are devoid of civilians. "Game over, Gaddafi," was sprayed on one wall.

Another villa in the Gargur area, which locals said belonged to Abdullah Senussi, Gaddafi's brother-in-law and a close confidant, has also been pillaged.