Gaddafi loyalists showed they were still a threat by attacking the desert oasis town of Ghadames, on the border with Algeria. 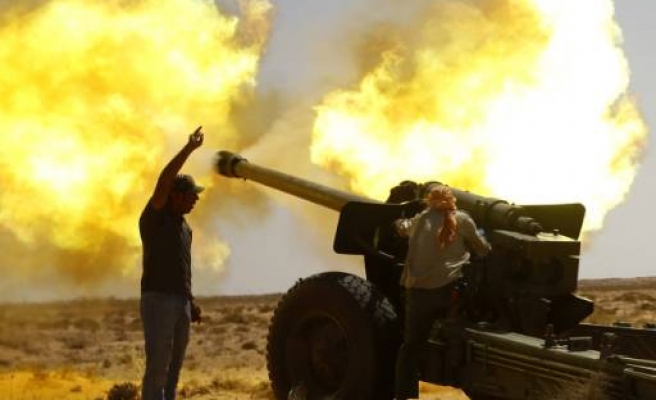 NATO bombing raids hammered the Libyan city of Sirte on Sunday to clear the way for fighters with the Libyan interim government who are trying to capture Muammar Gaddafi's hometown.

But Gaddafi loyalists showed they were still a threat by attacking the desert oasis town of Ghadames, on the border with Algeria. The interim government said the attacks had been repulsed but some reports said fighting was still going on.

Earlier this weekend, the forces of the National Transitional Council (NTC) had pushed to within a few hundred metres of the centre of Sirte -- one of the last bastions of pro-Gaddafi resistance in Libya -- but later drew back to let the NATO jets do their work.

"Yesterday our freedom fighters attacked Sirte city from two sides. That doesn't mean that Sirte is free now, but it is an indication that Sirte will be free soon," said Ahmed Bani, NTC military spokesman in Tripoli.

"I'm asking now any militiamen fighting on the side of the tyrant (to realise) that the game is over."

On Sunday, the roar of jet engines could be heard overhead, and sporadic booms when NATO ordnance hit targets on the ground. One strike, giving off a deep thud, released a big cloud of smoke and dust over the south of the city.

"NATO has dropped a lot of bombs today," said one rebel fighter, who declined to give his name. "You can see the planes up above. They struck along here," he said, gesturing with his hand across the area south of the city centre.

NATO's support for the anti-Gaddafi rebellion played a major part in toppling Gaddafi and the alliance says it will keep up its operations for as long as needed.

In a statement, the alliance said its sorties on Saturday in the vicinity of Sirte had struck targets including 2 command and control facilities, a military staging area, a storage bunker and radar facility, and 29 armed vehicles.

Taking Sirte would be a huge boost for the NTC as it tries to establish credibility as a government, and a blow for Gaddafi, widely believed to be on the run inside Libya.

But it is an awkward proposition because pro-Gaddafi fighters there are well armed and many of the residents have family and tribal ties to Gaddafi.

Accounts from NTC fighters and people who had managed to leave Sirte indicated that pro-Gaddafi forces were trying to prevent civilians from fleeing, effectively using them as a human shield.

"Gaddafi's forces have surrounded the area, closed it off, by shooting at people," said a man called Youssef, who was driving away from Sirte with his wife. "There are a lot of people who want to get out but can't."

He said he and the other civilians from Sirte leaving the city on Sunday morning had escaped by cutting through the desert.

That was echoed by another man, called Abubakr, who was heading out of Sirte with his wife and four children in a car loaded with baby diapers and food.

"The situation is not good, really it is not good. It is terrible. There are (pro-Gaddafi) gangs unloading on people, shooting at them. It's really bad," he said.

A Gaddafi spokesman has accused NATO and NTC forces of killing several hundred civilians in strikes on Sirte.

That, along with the accounts that pro-Gaddafi forces are killing civilians, could not be independently verified because journalists have only been able to reach the parts of Sirte held by the interim government.

The attack by pro-Gaddafi forces on Ghadames underlined the fragility of the NTC's grip even on parts of the country nominally under its control.

The town, about 600 km (400 miles) south-west of Tripoli, is near a border crossing that pro-Gaddafi Libyans have used to flee into Algeria. Its old town, an intricate maze of mud walls, is listed as a UNESCO world heritage site.

"These militias have attacked our people in Ghadames city ... All the information we have got is that these groups are related to the son of Gaddafi, Khamis," the NTC's Bani told a news conference.

"Our freedom fighters have taken control of that area," he said, though he acknowledged the clashes were not completely over. "This problem will end soon. It's a matter of days."

NTC officials said the attack by Gaddafi loyalists had been repulsed on Saturday, but two Arabic television stations reported new clashes at dawn on Sunday.

"The battle is continuing," a witness called Mohammed Adeemus told the Al Jazeera channel. He said pro-Gaddafi snipers were inside the town, targeting civilians. "We call the NTC to intervene immediately," he said.

A month after ousting Gaddafi's forces from Tripoli and most of the country, the NTC is now facing challenges to its rule from only two main locations, Sirte and Bani Walid, a town about 170 km (105 miles) south-east of Tripoli.

Until both those places are captured, Libya's new rulers say they cannot begin the process of holding the first elections. That leaves the country in a tense limbo where the only real authority comes from disparate factions of anti-Gaddafi fighters who are still armed and want a stake in the new Libya.

Attempts to capture Bani Walid have ended in chaos, and now the anti-Gaddafi forces appear to have switched their focus instead to taking Sirte.

"The symbolism of a Sirte victory would be much greater than winning Bani Walid," said Geoff Porter, an independent U.S. expert on north Africa.

"The collapse of Gaddafi's hometown would reverberate amongst the dead-enders and could facilitate the fall of Bani Walid," said Porter.

"There are weapons believed to be internationally forbidden, and they are under our control," he told a news conference in the eastern city of Benghazi, where the NTC has its headquarters until it relocates to the capital.

"We will seek help from local experts and the international community to get rid of these weapons in a suitable way."

It was not clear if the weapons he referred to were new discoveries or were already known to international non-proliferation agencies.

The United Nations and other bodies say they had been aware for some time that Gaddafi had stocks of mustard gas, as well as raw uranium stored near Sabha.