Since Mandela's admission to hospital, hawkers have taken advantage and started selling items bearing his image. 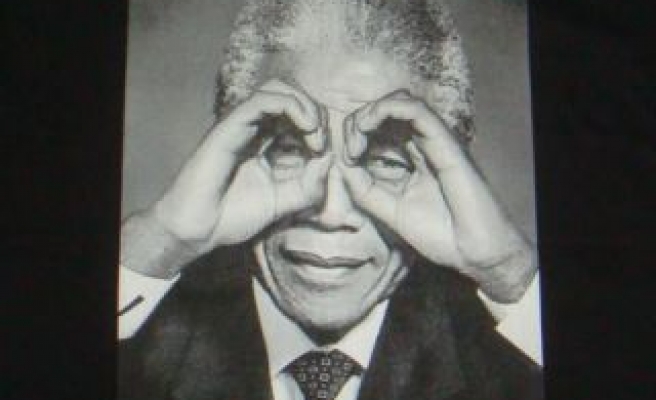 Street vendors, designer stores and book stores in South Africa are cashing in on former president Nelson Mandela’s illness by selling portraits, T-shirts and other merchandise branded with his image.

"Every time motorists see Mandela's portrait, they stop and buy, because his illness has created fresh interest among South Africans who love him so much’" Patrico Macia, a 28-year-old hawker, told the Anadolu Agency.

Mandela, who is revered like a saint in South Africa for fighting Apartheid, was admitted to a Pretoria hospital on June 8, suffering from a recurring long infection.

Since his admission to hospital, hawkers have taken advantage and started selling items bearing his image.

"I can’t complain business is booming, expect for the Metro police who keep on chasing us away from the stop signs," he added before running off to attend to a customer.

He is revered by South Africans as the father of their nation after spending spent 27 years in prison for taking up arms to fight the apartheid regime.

The ruling African National Congress (ANC) is paying tribute to the ailing hero by placing his pictures at the ANC headquarters in central Johannesburg.

In downtown Johannesburg, designer stores have stocked Mandela T-shirts, which cost between $300 - $400 depending on the quality and design.

"Most of my customers are youth and some of them have been buying two pairs of the Mandela T-shirts, because they love him," Thabang Tobela, a store owner at one of Johannesburg’s small streets, told the AA.

However, the Mandela shirts which were made popular by the former iconic leader during his term as president in the 1990 cost slightly more.

‘"The Mandela shirts go for $850 (Rand. 850) because of the expensive fabric and those who buy them are mostly middle class people and professionals," Tobela explained.

The Mandela shirts are long sleeved, flowered or striped shirts with big buttons, the same as those Mandela used to wear.

They are typically worn by local politicians, academics and middle class people.

When contacted for a comment, Sello Hatang, the spokesman for the Nelson Mandela Foundation, asserted it was not illegal for hawkers to sell Mandela T-shirts and portraits which did not bear his former prisoner number '46664.'

"We have a specified brand of clothing that we sell as a foundation to raise funds for good works," he told the AA in a telephone interview.

"We also authorize certain stores to sell those brands."

Book stores are also making a fortune out of Mandela’s illness.

Some of the country’s leading book stores have been promoting one of Mandela’s popular books, Long Walk to Freedom.