Next president should be military man: Mubarak

Mubarak believes that the country's next president should have a military background, praising Defense Minister Abdel-Fattah al-Sisi as a "shrewd", according to the independent Al-Youm Al-Sabe'a daily. 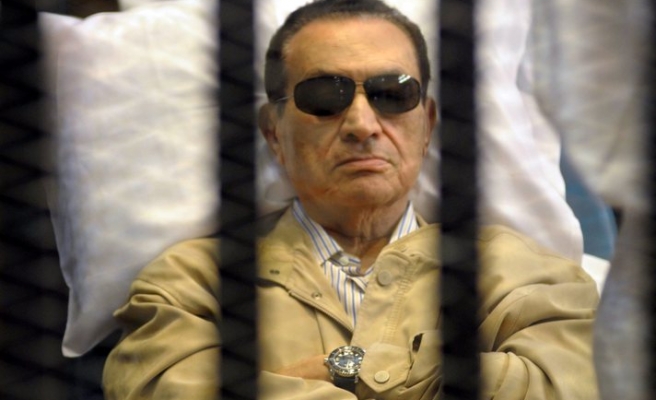 Egypt's toppled President Hosni Mubarak believes that the country's next president should have a military background, praising Defense Minister Abdel-Fattah al-Sisi as a "shrewd", according to the independent Al-Youm Al-Sabe'a daily.

"I initially thought al-Sisi was affiliated to the Muslim Brotherhood, before he turned out to be just the opposite," Mubarak was quoted by the paper as having said.

He praised the army chief, who was appointed by elected President Mohamed Morsi in last August before the latter was ousted by the same man less than a year later, as a "shrewd".

Mubarak's remarks came in leaked voice recordings of conversations with his doctors and guards in Maadi military hospital, where he is being kept under house arrest.

Al-Youm Al-Sabe'a published excerpts of the recordings and said that it would release a tape of three hours of Mubrak's chats later in the day.

Mubarak, who ruled Egypt with an iron fist for 30 years before being toppled by a youth-led popular uprising in 2011, suggested Egypt's next president should be "a man with a military background and charisma."

Mubarak insisted that the 2011 revolution that forced him from power "started at the hands of the United States in 2005."

Mubarak -- along with his two sons, former interior minister Habib al-Adly and six security chiefs -- are standing retrial on charges of complicity in the killing of unarmed protesters during the 2011 revolution.

Mubarak was also quoted by the independent daily as opposing a suggestion from Israeli Prime Minister Benjamin Netanyahu to relocate Gazans to the Sinai Peninsula.

"Israel wanted to resettle Gazans to Sinai, and Netanyahu has proposed it frankly six months before my departure," Mubarak said.

"I told him to forget about such a thing unless you want a war," added the ousted president, noting that Netanyahu made the proposal as a test balloon.

Mubarak also accused the Palestinian resistance group Hamas, which now controls the Gaza Strip, of being behind an attack that left 16 soldiers dead in Rafah last year.

Morsi is currently being charged with conspiring with Hamas to launch hostile acts in Egypt, attacking police facilities and soldiers and jailbreaks.

Speaking of the ongoing pro-Morsi protests in Egypt, Mubarak claimed that the Morsi sympathizers are "brainwashed".

"But as long as they round up the leaders, the youths would calm down," he argued.

Egyptian authorities have unleashed a massive crackdown on the Brotherhood since the violent August 14 dispersal of two pro-democracy sit-ins, in which hundreds of demonstrators were killed.

Since then, the military-backed authorities have rounded up hundreds of the group's senior and mid-ranking members, topped by supreme leader Mohamed Badie and his deputies Khairat al-Shater and Rashad al-Bayoumi.

"Al-Adly used to arrest 2,000 people and bring things under control," Mubarak said, referring to his once feared interior minister who was notorious for adopting brutal police tactics in dealing with the dissidents.

"If he is out for just three days, al-Adly would bring everything under control," Mubarak believes.