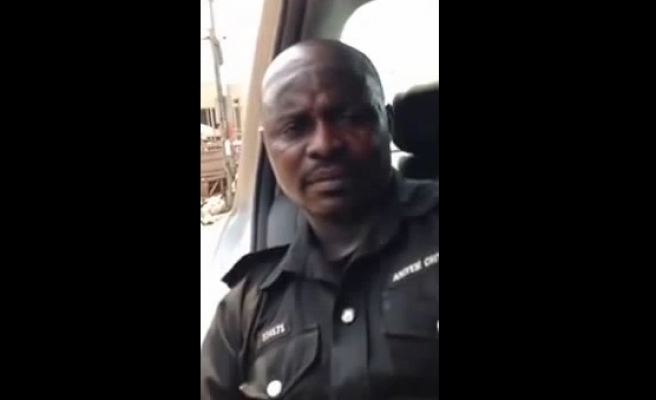 Just a few hours after the video went viral on YouTube, Nigerian authorities have arrested a bribe-seeking cop who is now facing disciplinary measures that may include outright dismissal.

"We have taken steps to tell the world that corruption is not an institutional thing in the police."

Conversations recorded in the footage suggest that the incident took place in Egbeda, a suburb of Nigeria's commercial capital Lagos.

"Like we did in the past, the police will make example of anyone hellbent on giving it a bad name," spokesman Mba told AA.

He said Chiyem was attached to the Isheri Division in the Lagos State Police Command.

"Following his arrest, the suspect who is now in police custody, is undergoing Orderly Room trials and if found guilty, will face appropriate disciplinary actions," Mba said.

The Inspector General of Police commended the unknown whistleblower for his painstaking efforts in exposing what would have been a hidden crime.

"He equally enjoins other members of the public to emulate this noble and patriotic action which will certainly go a long way in checkmating crime in our society," police said in a statement.

Chiyem was the fifth Nigerian policeman caught on camera wanting to extort motorists.

Extortion is rampant among policemen and has largely become a routine on the highways and public garages/parks across Africa's most populous country.

In August of last year, a police sergeant was thrown off the force after being caught demanding a bribe in a similar video.

Two weeks later, in another video, two policewomen were seen demanding N100 (worth less than one dollar) from a Lagos motorist.

Last September, yet another video emerged showing a cop requesting a 10,000-naira bribe from a driver in the country's southeastern Anambra State.

Transparency International rates Nigeria as among the most corrupt countries in the world.