Nigeria monitoring 400 contacts of doctor who died of Ebola

Iyke Enemuo carried on treating patients and met scores of friends, relatives and medics, leaving about 60 of them at high risk of infection 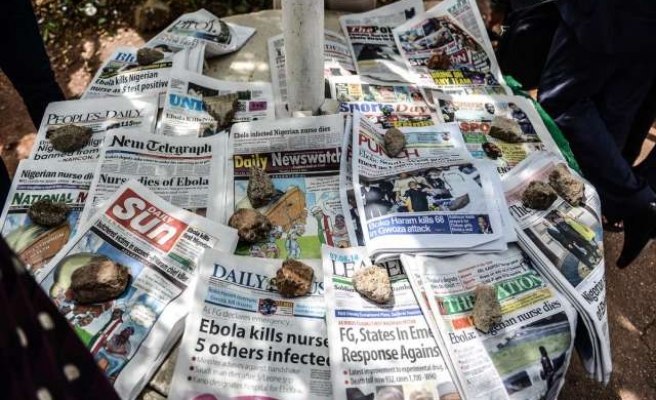 Nigerian authorities are monitoring nearly 400 people for signs of Ebola after they came in contact with a Port Harcourt doctor who died of the disease but hid the fact that he had been exposed, a senior Nigerian health official said on Thursday.

Dr. Abdulsalami Nasidi, project director at Nigeria Centre for Disease Control, said there was a sense of "hopelessness" due to the lack of proven drugs or vaccines to treat Ebola that has infected 18 people in Africa's most populous nation.

In an interview with Reuters in Geneva, he said that more isolation wards were being opened in the oil industry hub but voiced confidence that there would not be "many cases" there.

After having contact with an Ebola patient and before his own death on Aug. 22, the Port Harcourt doctor, named by local authorities as Iyke Enemuo, carried on treating patients and met scores of friends, relatives and medics, leaving about 60 of them at high risk of infection, the World Health Organisation said on Wednesday.

The doctor's wife, who is also a physician, and a patient in the same hospital have been infected with Ebola, the WHO said.

"Everything about this doctor was in secrecy, he violated our public health laws by treating a patient with a highly pathogenic agent who revealed to him that he had contact with Ebola and didn't want to be treated in Lagos because he might be put in isolation," Nasidi said.

"He treated him in secrecy outside hospital premises. When he became ill he did not reveal to his colleagues that he had contact with someone who contracted Ebola. He was taken to General Hospital, a private hospital that sees everybody.

"That is the only case that effectively escaped our surveillance network. We are paying now for it," Nasidi said.

He spoke on the sidelines of a two-day WHO experts meeting aimed at speeding development of Ebola drugs and vaccines.

The deadly virus can be spread by direct contact with body fluids and secretions of an infected person or during traditional burial rituals, the WHO says.

The latest outbreak has spread from Guinea to Liberia, Sierra Leone, Nigeria, and Senegal and, with the death toll at more than 1,900 people as of Wednesday, has killed more people than all outbreaks since Ebola was first uncovered in 1976.

"People are living in a state of hopelessness seeing the disease has no cure and no vaccine but has great potential to spread," Nasidi said.

Nasidi said the Port Harcourt doctor was visited by friends and family in hospital, including some who "laid hands" on him.

"As we are talking now, we have more than 380 of such contacts in our dragnet," he said. Those at high risk are being quarantined, and some 500 volunteers and health care workers are checking on all exposed people twice a day, he said.

A 28-bed isolation ward for Ebola patients has opened in the city, which is home to many expatriate workers in major international oil companies, but authorities did not forecast many more cases, Nasidi said.

He said most of the exposed contacts were near the end of the 21-incubation period for the disease, which starts with fever and muscle pain, followed by vomiting and diarrhoea.

"So we are monitoring and are sure we shan't miss out on any contacts that come out with infection that could be transmitted. A contact who has no symptoms doesn't transmit even if he has the virus. So this is why we are hopeful," he said.

The United Nations said on Wednesday that $600 million in supplies would be needed to fight West Africa's Ebola outbreak.

"We must fight Ebola because there is huge anxiety for our populations along with significant social and economic consequences," Younoussa Ballo, secretary-general of Guinea's health ministry, told Reuters at Thursday's talks. "Research must be speeded up to have medicines to confront this epidemic."

Human safety trials are due to begin this week on a vaccine from GlaxoSmithKline Plc and later this year on one from NewLink Genetics Corp. Johnson & Johnson said on Thursday that clinical trials of its vaccine would commence in early 2015, accelerated from late 2015 or early 2016.

NewLink founder Charles Link told Reuters in Geneva: "The clinical trials do take some time. Everybody is trying as hard and furiously as possible to move those trials forward as rapidly as possible with the regulations, scientific and ethical constraints.

"Just because we have the drugs we haven't shown anything about their effectiveness so we have to do these initial studies before it would be appropriate to release them on any kind of broader scale," he said.

"So that is really what our group is here for and a number of other groups like ours, is to try to coordinate those activities to do things at speeds that haven't be done before."

The U.S. Department of Health and Human Services said this week a federal contract worth up to $42.3 million would help accelerate testing of an experimental Ebola virus treatment being developed by privately held Mapp Biopharmaceutical Inc.