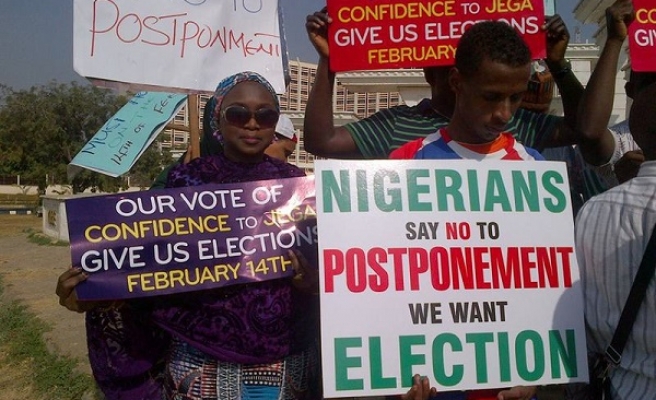 "This decision was taken in good faith and in the interest of democracy," the Independent National Electoral Commission Chairman, Attahiru Jega, told a press conference in the capital, Abuja.

He said the polls would be held on March 28 instead of Feb. 14 as earlier scheduled.

The governorship and state assembly elections, meanwhile, would be shifted from mid-March to April 11.

Nigerians were supposed to go to the polls on Feb. 14 to elect a president and members of the federal parliament.

Although 14 candidates will vie for the presidency, the poll is largely seen as a race between incumbent President Jonathan and Muhammadu Buhari, a former military ruler.

Buhari is running on the ticket of the opposition APC, an amalgam of political interests that have come together in an attempt to wrest power from Jonathan's People's Democratic Party, which has ruled the country since its return to democracy in 1999.

The delay was widely anticipated.

"Except anything changes, it has been agreed that the election should be postponed by at least four or six weeks," a highly-placed source within the commission told AA on Saturday morning.

"Election may now hold in late March," said the source. "Many things are yet to be in place and unless the date is shifted, the election could be a mess."

The election commission, meanwhile, linked the decision to the security situation in Africa's most populous nation.

"The commission has decided to take the advice of the security chiefs and has, therefore, decided to adjust the date of the election as allowed within the law," Jega said.

"The national security adviser wrote the commission drawing attention to the recent developments in the northeast and that they needed some time to prosecute some operations there," he said.

A military source told AA on Saturday morning that the army made "it absolutely clear to the commission that security cannot be guaranteed for the poll unless a little more time is given."

Heavily-armed soldiers were deployed in many Nigerian state capitals, including Lagos, on Saturday morning.

Truckloads of security officials, mostly the army, have been sighted in key areas of Lagos, a development many Nigerians think could be a measure to forestall protests in the event that the election is postponed.

The same deployment has been reported in Kano, Kaduna and many parts of the northern region, according to eyewitnesses.

But in Washington, Secretary of State John Kerry said the U.S. was "deeply disappointed" by the decision to delay elections, and warned against "political interference" in Nigeria's electoral commission.

"Political interference with the Independent National Electoral Commission is unacceptable, and it is critical that the government not use security concerns as a pretext for impeding the democratic process," America's top diplomat said in a statement. "The United States underscores the importance of ensuring that there are no further delays."