"The suspension of Sanusi has nothing to do with whistleblowing," Jonathan told local journalists in a televised news conference. 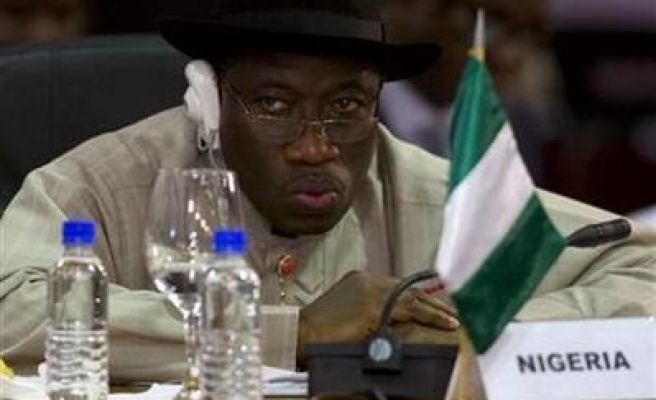 Nigerian President Goodluck Jonathan said on Monday his decision to suspend the central bank governor had nothing to do with the governor's exposing corruption in the oil sector.

Jonathan suspended Governor Lamido Sanusi on Thursday on allegations he had mishandled the bank's budget. Sanusi, due to step down in June, was becoming an increasingly vocal critic of the government's record on tackling corruption.

The move caused a panic selloff in financial markets.

Sanusi had been presenting evidence to parliament that he said showed that state oil company Nigeria National Petroleum Corporation (NNPC) failed to pay $20 billion it owed to federal government coffers, fuelling speculation his suspension was an attempt to silence a whistleblower.

"The suspension of Sanusi has nothing to do with whistleblowing," Jonathan told local journalists in a televised news conference.

"The government normally places you on suspension pending investigation, and when they conclude the investigation, you may go back if there's no case against you."

He said an audit had been done of 2012 and 2013 central bank accounts that has shown several irregularities - the 2013 audit had just come in, which was enough to convince him there was a case against Sanusi, he said.

Sanusi has said he will challenge his suspension in court.

Jonathan denied that $20 billion could have gone missing from state oil revenues, saying he would not even "accept that one dollar should disappear".

The governor's suspicion of fraud in one of the world's most opaque national oil companies brought him into conflict with Jonathan a year before what are likely to be closely fought elections.

Jonathan was already under pressure from several corruption scandals and a failure to quell a four and half-year-old insurgency in the north that, while more or less contained in one area, appears to be becoming bloodier than ever. More than 200 people were killed in two attacks last week.

Jonathan told the journalists the military had had some successes against Boko Haram and that Nigeria was working with Cameroon authorities to try to prevent the militants mounting attacks on Nigerian soil then fleeing back over the border.

"The communities naturally will feel government is not giving them protection," he said. "But I promise that we will continue to improve."