Many Nigerians want to renegotiate the colonial-era union between north and south. 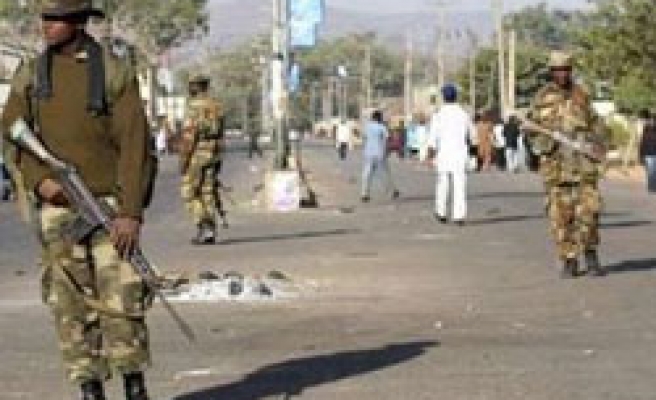 As Nigeria celebrates the 53rd anniversary of its political independence from Britain on October 1, many Nigerians want to renegotiate the colonial-era union between north and south.

"Until the over 300 ethnic nationalities in Nigeria come together in a national conference to discuss the way forward, peace and security may continue to elude the country," professor Ben Nwabueze, coordinator of the Nigeria Consensus Group and chair of The Patriot group, told the Anadolu Agency.

Both organizations are fierce campaigners for a national conference devoted to "renegotiating Nigeria," a movement that gained momentum in the culturally diverse south around 1994 following the annulment by a northern military clique of a presidential election presumably won by Moshood Abiola, a Muslim southerner.

The movement peaked after the country returned to democracy in 1999.

Its proponents say such a conference would address "national questions," such as citizenship/indigene-ship, resource control, the right of secession, the role of religion and structure and the system of government, among other issues.

The country's myriad ethnicities, they insist, should negotiate on the basis of "continued coexistence of the different peoples of Nigeria."

In 2005, a coterie of civil society outfits and ethnic groups from across Nigeria held a "sovereign national conference" in Lagos. But its outcome ended in the dustbin of history, marred by controversy and personal ambition.

The event coincided with another confab organized by the Nigerian government under former President Olusegun Obasanjo devoted to deciding the structure of the country.

That government confab, too, ended in controversy.

All previous national censuses had showed the north to be more populous than the south. The claim is disputed by the south, however, which alleges that previous censuses were manipulated in the North's favor -- first by British colonialists in 1954 and then by local leaders.

The last census in 2006, which was spearheaded by a president from the south, also showed that the north boasts a larger population.

Census figures determine how national resources and political appointments are allocated between the country's various regions.

On October 1, Nigerians celebrate the 53rd anniversary of their independence from Britain -- an annual ritual for which citizens and government officials gather to deliver speeches.

But equally important and symbolic is the year 2014, which will mark 100 years since the culturally diverse and rebellious south was merged with the near monolithic north in what has come to be called the "amalgamation" of southern and northern Nigeria.

But if the act was beneficial to Britain, which could boast possession of Africa's largest colony, amalgamation has proven controversial, if not problematic, for the country's multifarious ethnicities -- so much so that many would like to see the north-south union renegotiated.

"There is a need for the people to sit down and decide what kind of union they want," Nwabueze told the AA.

"Is it a confederacy, a federation or a unitary system? The people themselves must decide this," he said.

Nwabueze and his ilk believe that the National Assembly, members of which are elected on a partisan basis, cannot be trusted to produce a national constitution agreeable to all the country's many ethnicities.

Tunji Braithwaite, an octogenarian lawyer who once contested Nigeria's presidency, says there is no alternative to the proposed national conference.

"What they call 'constitutional amendment' is pretense. It is dominated by the selfish interest of National Assembly members," Braithwaite told the AA.

"I implore everybody to join [in] whatever strength you have to ensure the success of the revolution," he said. "We will not allow imposters to misrule this country before we institute the Sovereign National Conference and revolution."

"It is advisable for government to join the national salvation effort because people will no longer be kept down," he added.

Braithwaite's call to the government to key into appeals for a national conference tallied with the position of Nwabueze, who said his group had sent a delegation to President Goodluck Jonathan specifically tasked with discussing the issue.

Nwabueze said his group may refer a bill to parliament on the matter if the president was found foot-dragging.

"The unity-cum-diversity approach in the constitution of South Africa as embodied in aspects of the system is worthy of consideration in any effort to restructure the Nigerian Federal System," he argued.

"Thus, we have the experiences of two African countries, Ethiopia and South Africa, to draw from in any such restructuring exercise," Nwabueze said.

Their southern counterparts, however, favor a parliamentary system with provisions for regionalism and fiscal federalism -- meaning, in other words, a weak central government with states in control of their own resources while sending tax revenues on to the central  government

Proponents of a weak central government say each region should be allowed to develop at its own pace.

Southerners also oppose the "federal character," a constitutional principle according to which offices are allocated to every section of the country. Its southern critics believe the principle promotes mediocrity, as it fails to recognize merit or excellence.

Asari Dokubo, a former Niger Delta militant, said the minimum requirement for guaranteeing a united Nigeria was for the country's various ethnicities to agree on the bases of coexistence.

"It is a simple matter. Let us negotiate how we are going to live together in peace," he told the AA.

"We are different peoples forced into a union by the British," he added. "But the time has come for us to renegotiate our continued co-existence."

Ayo Adebanjo, a leading member of The Patriot group, believes that unity does not necessarily mean uniformity.

"Devolve more extractive, productive and allocative power to peripheral regions to own and tackle the challenges of their environment, each at its own pace," he told the AA.

"The current structure encourages satellite passivity because of the mindset that money will always come from the center," Adebanjo said.

But there are other Nigerians opposed to the idea of a national conference, although their opposition is not to the restructuring of the country for the purpose of accelerated growth.

"The amalgamation is not the problem," Tanko Yakassai, a second republic lawmaker from the north, told the AA. "The structure is not the issue."

"The issue is human greed," he contended. "Even if our Niger Delta brothers were allowed 100-percent control of oil resources, it won't end the poverty there."

"It is true the north ruled this country for long, but has it translated to prosperity for the children here? No," Yakassai said. "That is because the politicians fight only for their pockets."

Anthony Sanni, spokesperson of the Arewa Consultative Forum, said the north was not against the idea of Nigerians meeting to discuss a way forward for the country.

Nonetheless, he said that the people of the region were averse to any conference that challenged the legitimacy of established democratic institutions, such as the presidency and the National Assembly.

"We are not opposed to a national conference that brings Nigerians together," Sanni told the AA.

"What we are opposed to is the idea of having a sovereign national conference which invariably means a vote of no-confidence on the institutions of democracy," he asserted. "That is unacceptable."

Yerima Shettima, a prominent northern youth leader, said there was no alternative to people of different cultures and religions discussing the best way forward.

But he warned against entrusting such a gathering to sovereign powers, which "may mean subjecting the continued existence of Nigeria to a talk [conference]."

"The disadvantages far outweigh the advantage, because no nation splits peacefully," Shettima told the AA.

SSPA spokesperson Anyakeme Whiskey told the AA that the proposed national dialogue should not be sovereign due to the dangers involved.

"For instance, a sovereign national conference may say that we don't want this parliament," he said. "It can say, 'Let's split the country' and the country remains split."