Nigerian electoral body in hot water ahead of 2015 vote

The commission has been criticized for its handling of voter registration 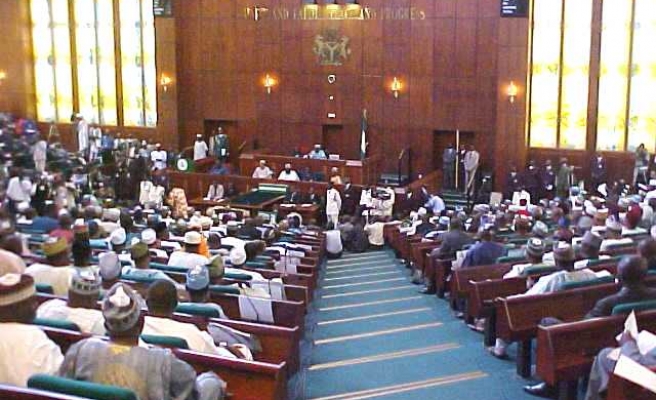 Nigeria's Independent National Electoral Commission appears boxed into a corner ahead of a February general election, dogged by suspicions regarding its oft-repeated promises to deliver a cleaner poll in a nation with history of tainted balloting.

"I do not envy the commission," Ali Shugaba, a political scientist at Enugu State University, told The Anadolu Agency.

"It [the commission] is going to organize an election in which a deeply unpopular incumbent [president] is standing as a candidate alongside an opposition that seems desperate to win the presidency at any cost," he said.

Last week, the commission hastily dropped its decision to create 30,000 new polling units nationwide, which it said were meant to ensure that polling areas situated in "unwholesome areas" – such as outside local politicians' homes – were relocated to more suitable places.

It also pointed out that more polling centers were required to "decongest" certain booths, which were meant to cater to more than the average 500 voters.

The initiative, which appears to favor the northern region in terms of new polling units to be stationed there, has been met with suspicion.

Several known supporters of President Goodluck Jonathan have claimed that Commission Chairman Attahiru Jega, a no-nonsense former university teacher from Nigeria's northwestern Kebbi State, was planning to rig the upcoming election in favor of the north.

"The fact that the verbal attacks on the commission were led by a former minister of information [Edwin Clark], who prides himself for being the godfather of the president and is also his kinsman, reflects the tragedy of the situation," said political commentator Nwachukwu Godwin.

"The debate was made to look like there was an agenda by the north to use the additional polling units to be created as a tool to unseat the president," he told AA.

"It was made to look like there was an ethnic conspiracy; and that is a danger we face ahead of the poll," Godwin asserted.

"There is an unhealthy ethnic divide. Some people sound like the president only represents the interests of the Ijaws," he added, referring to the minority ethnic group – based in the oil-rich southern Bayelsa State – from which Jonathan hails.

Nor, however, is Godwin pleased with the electoral commission's decision to back down.

"It gives the impression that its earlier decision wasn't thought through," he said. "This, too, has its dangers."

Since returning to democracy in 1999 after three decades of military rule, Nigeria has since held executive and legislative elections every four years.

Only a few states have had the results of their own state polls challenged following court rulings that nullified the election of certain governors amid allegations of electoral fraud.

Upon returning to democracy, Nigeria's ruling People's Democratic Party openly tailored its presidential ticket to the needs of the south in an effort to heal bad blood between the two regions after the results of 1993 presidential polls – swept by southern business mogul Moshood Abiola – were annulled.

It is widely alleged that annulment of the 1993 poll results had been a conspiracy by the northern military ruling elite to prevent a southerner from assuming highest office.

According to the pact, now written into the ruling party's constitution, power should return to the north after the south has held it for an eight-year period.

So when former president Olusegun Obasanjo wrapped up his eight years in 2007, a northerner, Umaru Yar'Adua, succeeded him, with Jonathan as his deputy.

But Yar'Adua died in 2010 – barely two years into his tenure – leading Jonathan to succeed him, in line with the Nigerian constitution.

Jonathan had been expected by the north to simply finish Yar'Adua's first four years in office, which ended in 2011, before relinquishing power to another northerner in the spirit of the agreement.

But the president shunned the pact and sought reelection, thereby creating bad blood between the two regions.

With Jonathan now seeking another term as president, Nigeria's northern region appears determined to oust him, using the opposition All Progressives Congress as its platform.

But perhaps the most contentious issue in the run-up to the upcoming poll is the controversy over the electoral commission's handling of the voter registration process.

Last weekend, the governor of Nigeria's most populous state, Lagos, asked the commission to explain why the names of a whopping 1.4 million voters had been deleted from the state's 6.1 million registered voters who had registered to vote in the 2011 election.

The governor said that, rather than decrease, the state's voting strength should have increased given its rising population, the majority of which had been under 18 four years ago.

He accused the commission of following a script written by the ruling People's Democratic Party – an allegation rejected by the commission.

"It is true that, at the end of the 2011 general registration exercise, the commission announced a figure of 6.1 million registrants in the state," the commission said in response to the accusation.

"But when that data was subjected to Automated Fingerprints Identification System software, 82,892 multiple registrations were eliminated," it explained.

The commission also cited the loss of data and incomplete data affecting some one million records, mostly at 1,792 polling units that were identified and made public before the present exercise.

"That was why the Post-Business Rule figure for Lagos State came down to about 4.6 million registrants," the commission said in a statement.

The commission said that lost data would be recaptured in the continuous voter's registration, which began on November 12 in at least seven states, including Lagos.

But the opposition is not satisfied with these explanations, questioning why the commission is making the information public only three months before the next election.

"I believe that opposition politicians can make any claim, however outrageous," Tunde Akanni, a teacher of mass communications at Lagos State University, told AA.

"But the key question is: has the electoral commission helped the matter? No. Definitely, no," he asserted.

"The commission had four years to prepare for the distribution of permanent voter's cards," noted Akanni.

"Why is the whole process a mess, especially in states where opposition is stronger, like Lagos?" he asked.

"Reports indicate that more than 50 percent of those who registered and ought to get permanent voter cards were not able to obtain them," said the expert, adding that the commission's staff was "woefully inadequate."

Akanni recalled that, last Friday, when card distribution was to start and the government declared a holiday for the purpose, the electoral commission had bungled the exercise, claiming to have encountered technical glitches.

"In many areas where thousands are to collect their voter cards, many did not see their names and the time was so short so that many people could not obtain them," he said.

Except for new registrants, the commission says anybody without a vote registration card – a smart card that carries the voter's basic information, like biometric data and facial features – cannot cast a ballot.

This makes it near impossible for politicians to manipulate the polling.

Dawisu Ibrahim, a political analyst in Kano, the most populous northern state and an opposition stronghold, described the voter card collection exercise as a flop.

"We had one officer per electoral ward," he told AA. "That is outrageous."

"You cannot blame the opposition for alleging anything," Ibrahim said. "The commission set itself up for failure because it had four years to prepare for this."

Kayode Idowu, spokesman for the electoral commission chairman, said those who were not able to receive their cards could always collect them at the commission's local offices before the election.

He told AA that the card collection period was extended by one or two days in some areas, including Lagos and Kano, which had suffered some hitches at the beginning.

But many people have faulted this alternative, saying many Nigerians were too busy trying to eke out a living to go queue up at a local government area for voter cards.

"Except if anything changes, millions stand disenfranchised from the coming election," Saheed Ibrahim, a civil servant in Lagos who could not get his voter card, told AA.

To vote or not

Even as the commission battles with the voter registration crisis, it remains to be seen how it will handle the debate over whether the election should be held in the northeastern region, where Boko Haram militants have seized many local government councils.

The commission has not made any final decision on the matter, although Jega, the commission chairman, doubts he would post officials to where they would not be safe.

"The problem here is that two of the three states where Boko Haram is most active belong to the opposition," noted Ishola Ayanwale, a democracy campaigner.

"They would not take it lightly if you say you are not holding elections there," he asserted.

In recent months, Boko Haram has captured numerous towns and villages in Borno, Adamawa and Yobe states, declaring areas under its control an "Islamic caliphate."

Hundreds of civilians have been killed as a result and tens of thousands displaced. A state of emergency imposed on the trio of states is due to expire this week.

It is not clear whether the Nigerian government will seek to extend the state of emergency, which has been criticized for failing to rein in the militants.

"Heads or tails, we are heading for a controversial election year," Ayanwale told AA.