Use of the Ajami language, which is a local Hausa dialect that uses Arabic letters, predates the arrival of the British in Nigeria. 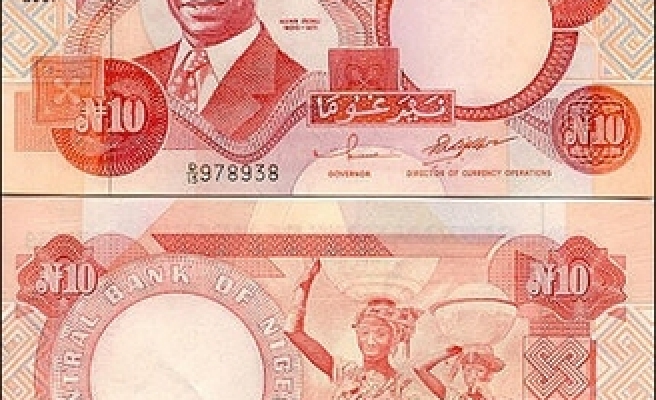 A new Nigerian banknote that removed an inscription written in Arabic letters has drawn the ire of the country's Muslim community, with activists linking the note's design to President Goodluck Jonathan's alleged disregard for Muslims – an assertion the presidency denies.

"The removal of the Arabic inscription, which is written in a language known in Nigeria's north as 'Ajami,' from the new naira note is very unfortunate," Khalid Aliyu, spokesman for the Muslim apex body Jama'atu Nasrul Islam (JNI), told The Anadolu Agency.

"This [the new note] is a slap on the face of the Muslims and a total disregard for their rights. We feel very strongly about this," Aliyu said, noting that, on the new note, the Ajami had been replaced with a symbol that some say resembles a six-pointed star, a sign associated with Israel.

President Jonathan recently unveiled a new 100-naira currency note, which does not contain the inscription in Arabic letters featured on the old one, but still contains the name of the money in Nigeria's three major languages: Igbo, Yoruba and Hausa.

Use of the Ajami language, which is a local Hausa dialect that uses Arabic letters, predates the arrival of the British in Nigeria.

Frequently used in the country's majority-Muslim north, it is said that most of the African continent's pre-colonial history was written in Ajami.

"It is a total disregard for the integrity and identity of Muslims in this country when a whole segment that constituted more than half of this country whose way of communication, the Ajami, right from time is being obliterated and now to be substituted by a Jewish sign," said Aliyu.

"It shows that, as Nigerians, we don't even matter and even foreigners are better than us and that is a sign of insensitive leadership that doesn't care about the cost or the implications of the actions they take," he charged.

The Muslim leader went on to rebuke Jonathan for the move, saying it did not demonstrate good governance on his part.

"Governance is about the ability to carry the people along. Whatever they uphold or respect should be respected by those in government, because governance is not impunity. It is not doing what you want, but doing what the people want," said Aliyu.

Asked if consultations were held with the Muslim leadership before the currency change, Aliyu lamented that the change had been made "unilaterally."

"If there is anybody to be contacted, then the first would be the Nigerian Supreme Council for Islamic Affairs (NSCIA) and the JNI, and there was nothing to that effect. At any rate, we would not have allowed that if we were consulted," he said.

For Muslims, Aliyu said, the removal of the Ajami script from the currency constitutes yet another example of the alleged "marginalization" of the Muslim community by the Jonathan administration.

He cited Muslim underrepresentation in the country's five-month National Conference, which was aimed at shaping the country's political system and future.

"It seems when we cry, it falls on deaf ears," he said, when asked if they planned to meet with the president to discuss the issue.

"We suffered during the conference, where only 189 Muslims attended an event of some 500 people. We cried out, but nobody cared," Aliyu said.

"Of course, that will not deter us from doing what we are supposed to do. We will continue to make our positions known, at least for the record," he asserted.

The controversy over the alleged replacement of the Ajami phrase with what some say resembles a Jewish Star of David was triggered by Nigeria's Muslim Rights Concern (MURIC), a faith-based organization headed by firebrand activist Ishaq Akintola.

In a statement obtained by AA, Akintola said the new 100-naira note came within the context of the president's "anti-Muslim agenda."

"MURIC has been inundated with calls for action on the Jewish symbol on the new 100-naira note, slated for flag-off in December. Nigerian Muslims are complaining that the Arabic writing in Hausa the language [i.e., in the Ajami script] that reads 'Naira Dari' [100 naira] on the note has been removed and replaced with the Jewish symbol, the Star of David," he said.

MURIC noted that Arabic inscriptions had featured on Nigerian currency since independence, going on to point out that, even when they were unceremoniously removed in 2005 from the 5-, 10-, 20- and 50-naira notes, they had remained on the 100-, 200-, 500- and 1,000-naira denominations.

"Nigerian Muslims regard the latest action – namely, the supplanting of Arabic with a Jewish symbol from the new 100-naira note – as a continuation of the campaign of elimination… against the Arabic language and, by implication, against Nigerian Muslims," read Muric's press release.

"It is well known that a large section of the Nigerian population use the Arabic Ajami and that removing it from the new note will deprive millions of users of the Arabic Ajami of the ability to recognize, identify and use the new currency," the group added.

Akintola even accused Jonathan of favoring Israel, saying, "There is nothing wrong for our president to like Israel as a nation."

"But it is another thing entirely to openly and brazenly promote Zionism at the highest office in this country when we are still struggling with the last vestiges of colonialism," the press release read.

It went on to warn that Nigerian Muslims were "becoming increasingly suspicious and very uncomfortable with the actions and inactions of President Jonathan."

"Not a religious desicion"

Yet Jonathan spokesman Reuben Abati dismissed the allegations, denying the existence of any religious motivations behind the design of the new currency.

"The proposed new naira note has nothing to do with religion whatsoever. It is completely wrong to accuse President Jonathan of being anti-Islamic on the basis of the design of the naira. He is the president of everybody, whatever may be their religious persuasion," Abati told AA.

"MURIC owes President Jonathan an apology for the various insinuations it makes in its statement. To start with, religion was not an issue at the national conference. Everybody has acknowledged that the National Conference was probably one of the best-organized in the history of Nigeria because it provided members with the opportunity to address a lot of issues," Abati asserted.

"MURIC also alleged in the statement that the president is friendly with Israel. This has nothing to do with Israel at all. They allege that there are security personnel in the [presidential] villa who are from Israel. There is no such Israeli security agent working inside the villa. It is not true," the spokesman added.

Abati also denied that the symbol on the new 100-naira note represented the Star of David or promoted Zionism.

"What they are complaining about is not the Star of David. It is not a Jewish symbol; it is not a Zionist symbol. Simple research will lay this to rest. The Star of David is a hexagram, two interlocked triangles of equal lines," he explained.

"What you have in the new naira are two squares merged into one. At the center you have the manila symbol, which represents the first kind of money that was used by the Portuguese in their various colonies," he went on.

According to Abati, the Ajami phrase was replaced with one in three major Nigerian languages, allowing Nigerians of different backgrounds to read it.

"As to what they are saying about the Ajami, Arabic is not a Nigerian language. If you look at the currency, the three major languages are there to indicate the value of the money for the benefit of the local people," he said.

"So you have the value of the money written in the three major languages: in Igbo, Yoruba and Hausa," added the presidential spokesman. "I think it would be very wrong for anyone to read religion into these things."