The Nigerian army earlier this month committed to investigating human rights abuse allegations but said it did not have the jurisdiction to investigate the Shiite clashes. 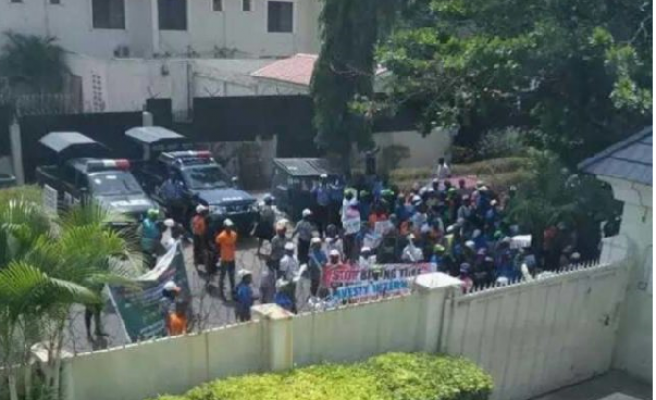 A Nigerian rights group on Tuesday called for an investigation into "attacks" on the Amnesty International office in Abuja following heavy criticism by the country's military.

Protesters had surrounded the Amnesty office in the Nigerian capital on Monday and Tuesday, demanding that the London-based rights group leave the country immediately.

The demonstration comes less than a month after the Nigerian military issued a press statement urging Amnesty to "desist from meddling into security issues in our country which is inimical to national interest, cohesion and unity."

Military spokesman Rabe Abubakar in February had accused Amnesty of "taking sides with terrorists and other belligerent groups to cause internal disorder".

In response to the protests, the Socio-Economic Rights and Accountability Project (SERAP), a Nigerian non-profit group, said that Nigeria should investigate "apparently sponsored and coordinated attacks" against Amnesty.

"Any failure to hold to account those who may be responsible will invariably increase the vulnerability of civil society in the country," said SERAP deputy director Timothy Adewale.

"Nigeria is a democratic society and the government can’t just sit back and watch reprisals, threats and increasing hostility to Amnesty International in particular, and the NGO community in general."

It also accused the military of attempting to cover up the "mass slaughter" of more than 350 people in 2015 after violence broke out between soldiers and supporters of the Shiite Muslim Islamic Movement of Nigeria (IMN) in the northern city of Zaria.

Today the military still plays a major role in shaping policy in Nigeria, one of Africa's largest oil producers that only became a democracy in 1999 following decades of military rule.

Current President Muhammadu Buhari is a former general and served as a military head of state in the early 1980s after seizing power in a coup.