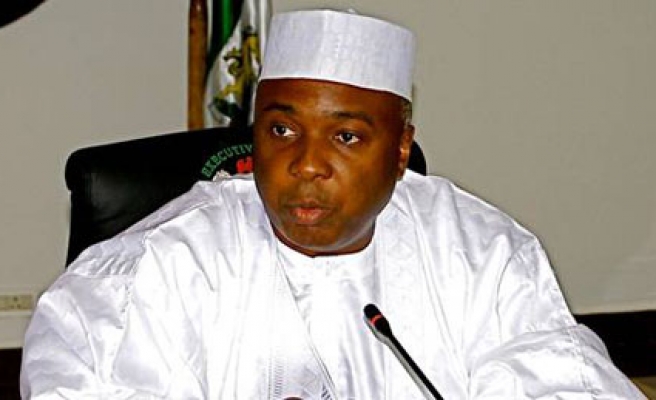 Bukola Saraki, president of the Nigerian Senate, entered the dock on Tuesday to answer charges of corruption and false asset declaration after the court brushed aside arguments that the tribunal lacked jurisdiction to try the case.

Saraki is standing trial before Nigeria’s code-of-conduct tribunal, which is tasked with verifying assets declared by public officials both before and after they serve out their terms.

Saraki faces 13 counts of corruption, including false asset declaration and the holding of foreign accounts while serving as a public official.

If the offences are proven, he would be forced to step down as parliamentary chairman and lawmaker and be barred from holding public office for ten years, while properties he procured with public funds would be forfeited to the government.

Saraki, who arrived at the court in the company of at least 12 senators and dozens of supporters, pleaded not guilty to all the charges.

He went on to say that his trial was due to the fact that he had assumed the Senate presidency against the wishes of his ruling All Progressive Congress (APC).

“I wouldn’t be in this box today if I hadn’t emerged as Senate president,” he said after entering his not guilty pleas.

Saraki is Nigeria’s first serving Senate president to be tried for corruption, although there have been earlier cases of legislative officials resigning their posts or being impeached for alleged corruption.

The lawmaker was ultimately granted bail, while trial proceedings were adjourned to Oct. 21, 22 and 23.

Saraki’s attempts to avoid prosecution came to naught on Monday after two courts rejected his request to have the trial suspended – a move that drew a storm of public criticism.

The lawmaker has been fingered in several past corruption cases, some of which are still being investigated by Nigerian security and anti-corruption agencies.