From politics and economy to security, education, healthcare and religion, many citizens are angry that the country has failed to live up to the dreams of its founding fathers at the dawn of independence in 1960. 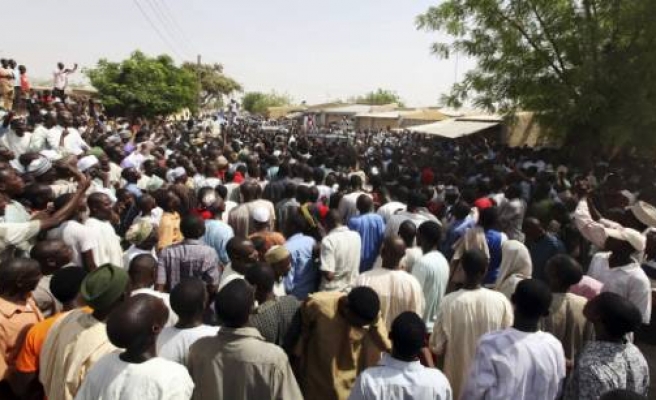 As Nigeria marks its 53rd independence anniversary on Tuesday, the country's government and people hold almost irreconcilable views as to whether or not there is any cause for celebration.

From politics and economy to security, education, healthcare and religion, many citizens are angry that the country has failed to live up to the dreams of its founding fathers at the dawn of independence in 1960.

They are dispirited by an increasingly poor economy and security crisis -- including an insurgency in the northeast and increasingly frequent armed robberies and kidnapping in the south -- along with political tensions ahead of 2014 presidential polls and 2015 general elections.

Oladoyin Adedayo, a chartered accountant, sees little room for optimism regarding the state of the economy as the country hits 53.

"Even more worrisome is the fact that official figures, which are usually very conservative, say that 42.2 percent of Nigeria's youth population is out of a job," she told the Anadolu Agency.

"You should also note that the House of Representatives Committee on Youth and Social Development says that 23 million of the over 40 million unemployed youths in the country are unemployable," Adedayo noted.

"No nation should go to sleep with such intimidating statistics," she added. "At 53, these figures are scary."

The national unemployment rate for university graduates is pegged at 23.9 percent; the unemployed youth population at a conservative 20.3 million; and the poverty rate stands at 71.5 percent. Meanwhile, the oil sector -- upon which the economy depends -- accounts for less than 10 percent of national employment, while interest rates in the country stand at 12 percent.

Henry Boyo, a nationally acclaimed economist and industrialist, says that while agriculture remains the best way to boost the economy and reduce unemployment, the current reality gives little hope this will happen.

"A lot of people have said we should be able to identify with the linkages that make it possible for agriculture to thrive," he told the AA. "Agriculture is a business just like any other type of business, and consequently it depends and thrives on the cost of funds."

"Agriculture can take two or three years before it germinates, and you are paying 20 percent per annum on interest," Boyo asserted. "How do you succeed with such?"

Scholars of political economy like Boyo have linked the dwindling fortunes of the Nigerian economy to soaring crime and unemployment rates nationwide.

For Yunusa Yau, a senior lecturer at the Ahmadu Bello Univeristy Zaria in the northern state of Kaduna, the country's woes are the result of "poor leadership."

"It is not celebration, but reflection that we need," he told the AA.

"Why have all the promises of independence failed to materialize?" Yau asked. "Why is it that we have a habitual law of diminishing return with respect to leadership, such that any new government tends to be worse than the previous?"

"I think we need to discuss these and try to figure out where our national development trajectory went wrong and what needs to be done to put it back on track," he said.

Yau also lamented the state of security -- or lack thereof -- in Nigeria.

"While there was a sign that things were improving, I think in recent weeks things have really degenerated," he asserted. "In the last week alone, more than 200 people have been killed."

"And we should not reduce insecurity to just Boko Haram," the lecturer averred. "Insecurity is so pervasive anywhere, from armed robbery to kidnapping and other forms of violence."

The health sector is also said to be suffering from its share of what citizens call "national decadence".

Onche Odeh, a veteran health journalist, said the country had done next to nothing to ensure better healthcare for the public.

"It has been ding-dong for health in Nigeria. There have been too many policy mix-ups with unwarranted duplication," Odeh told the AA.

"Some areas, like maternal health, have seen so much attention, but the underlying problems remain," he said. "In malaria, Nigeria has been more of a spectator and consumer of western efforts."

"HIV has become more of an economic power source for us, as it is obvious that we are making very slow progress," said Odeh. "Most disheartening is the unseen effort in prevention of mother-to-child transmission of HIV."

He added: "Polio remains endemic here and we seem to be holding the world back from eradicating the disease."

The veteran health journalist also argues that Nigeria has done "very little" to mainstream traditional medicine -- as China has -- despite the proven efficacy of many natural herbs.

"The health sector is still clogged by infighting," Odeh lamented.

The government, many Nigerians believe, has not done badly in guaranteeing the freedom of religion and the press -- although, many say, grey areas exist.

The rising profile of the country's National Human Rights Commission, a semi-autonomous body that holds government officials accountable for rights abuses, is seen as an indication of progress.

Eneruvie Enakoko, the Lagos chairman of the Civil Liberties Organization, said significant progress had been recorded regarding individual liberties, including the freedom of worship.

But Enakoko has some reservations, too.

"Yes, Nigerians have liberty, but it is a negative liberty because liberty without the basic necessities of life is nothing," he told the AA.

"It is like setting a man free who has been imprisoned unjustly for 20 years and has lost everything, without giving him money to go home and start a life with. You leave him shoeless and penniless," argued Enakoko. "He becomes destitute; there's no happiness in such liberty."

"By the same token, Nigerians have religious freedom, but such freedom is subject to the whims and caprices of the so-called religious leaders who are merely deceiving the people and enriching themselves and their families at the expense and stupidity/gullibility of the people," he added.

"Lastly, there is relative freedom of expression, but there appears to have been attempts in recent times to curtail it, especially with recent statements credited to Information Minister Labaran Maku [who said] that some media outfits are threats to national security," Enakoko concluded.

Professor Ishaq Akintola, a university don, believes that Nigerian politicians are taking the country down a catastrophic path.

"We are seriously perturbed by the recklessness of Nigerian politicians who appear to have learnt nothing from the mistakes of their predecessors," Akintola told the AA.

"Of grave concern is the topsy-turvy in the ruling party, which is capable of igniting nationwide chaos unless it is quickly arrested," he added.

"These trends are similar to the higgledy-piggledy that occurred in the old Western Region in the early sixties and which eventually culminated in Nigeria's first military intervention on January 15, 1966," the professor recalled.

"Things have not been the same since," he said. "Of the 53 years of Nigeria's post-independence experience, the military has ruled for 40 years."

"The once united country is fast disintegrating as a result of bad leadership, corruption and ethnicity," Celestine argued. "If things continue the way it is, I don't think there will be a Nigeria by 2015."

On Tuesday, President Goodluck Jonathan admitted that the country was split along ethno-religious lines -- a rare admission for a Nigerian president -- and asserted that "national dialogue" was necessary to heal the rift.

"In demonstration of my avowed belief in the positive power of dialogue in charting the way forward, I have decided to set up an advisory committee whose mandate is to establish the modalities for a national dialogue or conference," Jonathan said in a televised Independence Day address.

The government, meanwhile, holds a vastly different view than that held by most of the people.

In a press statement announcing Tuesday as a public holiday to celebrate the anniversary of independence, Interior Minister Abba Moro urged Nigerians to reflect on "the giant strides made by government in the development of the country, especially under the leadership of President Goodluck Jonathan."

The president himself reinforced this view when -- on a day in which suspected Boko Haram terrorists massacred 40 students in the country's northeast Yobe state --- he told the nation that "the security situation has improved significantly."

And while the country could not afford to pay statutory monthly allocations to its 36 states owing to dwindling oil revenue blamed on oil theft and bunkering, Jonathan dismissed as "ignorant" those who "claimed" the economy was less than ideal.

The president has said that the fact that he was recently invited to ring the closing bell on New York's Wall Street was a vote of confidence in his administration's handling of Nigeria's economy.

Indeed, the government claims that the national economy is one of the fastest growing in the world, boasting a growth rate of between 6 and 7 percent.