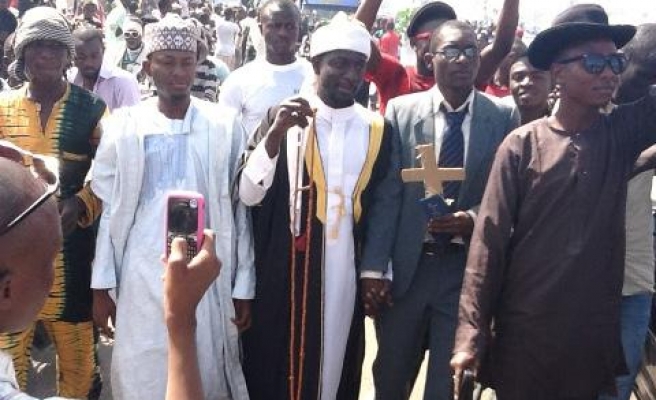 Eight months after Muslims rioted in Niger at a cost of 10 lives and many burned churches, efforts are afoot to mend ties with the Christian minority in the west African country.

The rampage was triggered in January when radicals angered by caricatures of the Prophet Mohamed in French satirical weekly Charlie Hebdo killed 12 people in an assault on the magazine's Paris offices.

In Niger, hundreds of Muslims took to the streets, clashing with police and razing 45 churches, five hotels, as well as bars and schools run by Christians. The French cultural centre in the second city, Zinder, was also set alight.

Muslims make up about 98 percent of the 17 million population in the deeply poor, landlocked nation south of the Sahara. Until the riots, they lived in peace with the small Christian minority.

However, the threat of armed activity is present both in the north, where Niger is prey to Al-Qaeda-linked groups in the desert, and the south, which has been attacked by Boko Haram fundamentalists from neighbouring Nigeria.

- 'Value of living together' -

Leaders of both faiths have been striving to restore strong community bonds by means of an inter-religious dialogue backed by a plan to "renew the value of living together" (REVE) funded by the European Union.

The aid organisation CARE International, based in the United States, is overseeing the REVE project "to prevent violence" on the ground and "strengthen peaceful coexistence", according to CARE chief in Niamey, Ibrahim Niandou.

"Committees for dialogue" have already been set up in the country's eight regions and their members reflect all religious tendencies, including "the most radical ones", Niandou said.

"Christians and Muslims mutually enlighten each other for better peaceful coexistence according to the recommendations of the Bible and the Koran," the national CARE chief added.

"You know what has happened over the past months in our country, and it is really down to misunderstanding each other," Seydou added.

Last week, the AIN hosted a peace forum bringing together about 100 Muslim religious jurists and doctors known as ulemas, Christian priests as well as theologians from both faiths.

"The crises are often triggered by religious leaders during their fiery preaching in the mosques and in the churches," Seydou explained.

"If we each keep to our own communities, it's very difficult for us to be able to understand one another," he said.

This week, Roman Catholics and Christian evangelists met "around the same table" for the first time, also with social harmony in mind, said Boureima Kiomso, chairman of the Alliance of Churches and Evangelical Missions in Niger.

"Agreeing to listen to one another and to reexamine ourselves in order to move on together is very important," Kiomso added.

Inter-faith meetings may not be enough to stave off more religious unrest in Niger, where Islam has been gaining ground, with mosques being built in big towns and small villages.

Some radical Muslims do not care for a spread of Christian places of worship, notably evangelical ones, sometimes next door to their mosques.

The enrolment of youths from Niger in the ruthless Boko Haram sect, against which Niamey forms part of a regional military alliance, shows radicalism has gained ground in the country.

Since February 6, Boko Haram and its local members have carried out attacks in the southern Diffa region, killing dozens of civilians and soldiers.

Diffa lies on the border with northeast Nigeria, where the rebels have waged a bloody uprising since 2009.

While Niger makes ready for general elections in 2016, its security forces must also contend with the threat of extremists movements coming across the border from Mali and Libya.

The Christian minority is "more wary" after the violence in January, Kiomso says.

"They have been forced to revise their positions and adapt to new conditions to be able to survive in Niger."

Adamou, a Muslim resident of the capital in the southwest, feels that "many Christians won the sympathy of Muslims who tolerated them badly" before the upheaval.