The clashes broke out when the protesters pelted a police vehicle with Molotov cocktails, leaving three policemen, including an officer, with burns in the face, the chest and the hands, eyewitnesses said 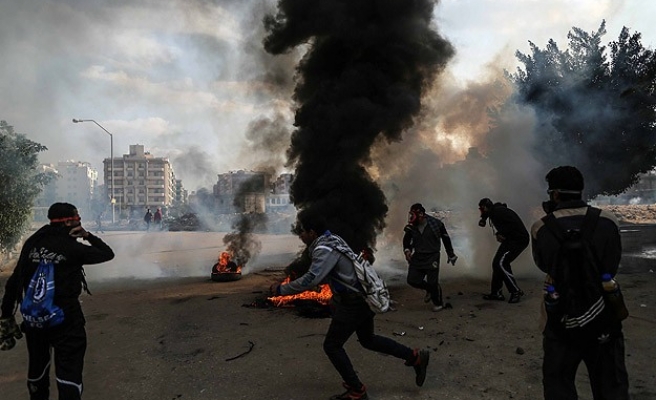 Two people were wounded by gunfire in the stomach and the neck and three policemen were injured late on Saturday in clashes that erupted in the Nile Delta province of Sharqiya, eyewitnesses said.

The two victims were wounded during a demonstration at the center of 10th of Ramadan city in Sharqiya to mark the first anniversary of last year's ouster by the army of elected president Mohamed Morsi.

Demonstrating activists flashed the four-fingered Rabaa sign, which commemorates hundreds of Morsi backers who were killed in the brutal dispersal of two support sites in August last year, as well as photos of the ousted president.

They also carried placards, calling for Morsi's return to power.

The clashes broke out when the protesters pelted a police vehicle with Molotov cocktails, leaving three policemen, including an officer, with burns in the face, the chest and the hands, eyewitnesses said.

They added that the policemen were taken to hospital to receive treatment, but two people were wounded with gunfire in the stomach and the neck later when anti-riot police arrived to the scene and used teargas and birdshot to disperse the demonstrators who also used fireworks.

The two victims were also taken to hospital, the eyewitnesses said, describing their condition as "critical".

It was not immediately clear whether the two victims were demonstrators themselves or ordinary people who happened to be at the site of the clashes at the time.

Policemen chased the demonstrators on the streets and managed to arrest two who were taken to a police station for interrogation, the eyewitnesses added.

Anadolu Agency could not immediately obtain comments from the Interior Ministry or the organizers of the protest on the clashes.

Morsi's backers marked the first anniversary of his July 3 ouster by the army with protests and marches in a number of provinces.

Scores of supporters were arrested on Thursday and Friday against the background of their participation in these protests and marches.