Nine UN peacekeepers killed in attack on convoy in Mali

The peacekeepers, who were from Niger, came under attack from unidentified, heavily armed gunmen on motorbikes 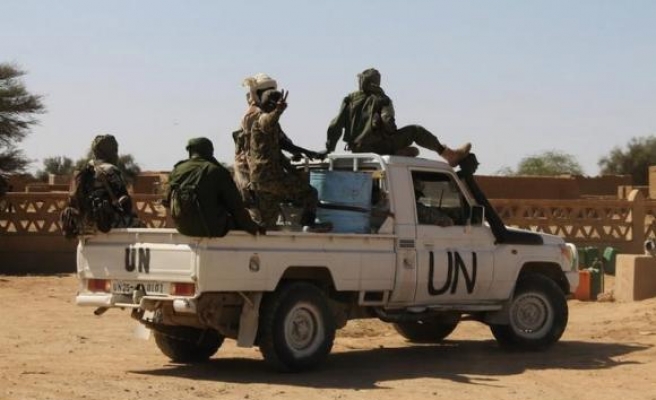 Nine United Nations peacekeepers in Mali were killed in an ambush on their convoy on Friday, the deadliest attack on the U.N. mission in Mali yet, a spokesman for the mission said.

The peacekeepers, who were from Niger, came under attack from unidentified, heavily armed gunmen on motorbikes between the northeastern towns of Menaka and Ansongo, Olivier Salgado told Reuters.

"I am horrified by this cowardly act of terrorism ... Once again, lives have been lost today in the name of peace in Mali," Arnauld Akodjenou, deputy head of the U.N. mission, known as MINUSMA, said in a statement.

U.N. peacekeepers have deployed across Mali's north in an effort to secure the vast desert zone that was occupied by a mix of insurgents were scattered by French forces last year.

The presence of international troops allowed Mali to hold elections last summer but France has since redeployed some of its forces elsewhere and there has been a spike in attacks.

Ten Chadian peacekeepers were killed in Mali last month, prompting accusations from Chad that its troops were being neglected by the U.N. mission.

Meanwhile, several prisoners broke out of jail in the northern Malian city of Gao, a military source said Friday.

According to the source, who requested anonymity, escaped prisoners managed to seize guards' weapons before fleeing.

Local residents told Anadolu Agency that they had heard gunfire Friday morning before learning of the mass jailbreak.

One resident said that Republican Guards were currently patrolling the area in search of the escapees.

If confirmed, it would not be Mali's first such mass jailbreak. In June, 15 prisoners broke out of a central prison in capital Bamako, leaving two dead, including a prisoner.