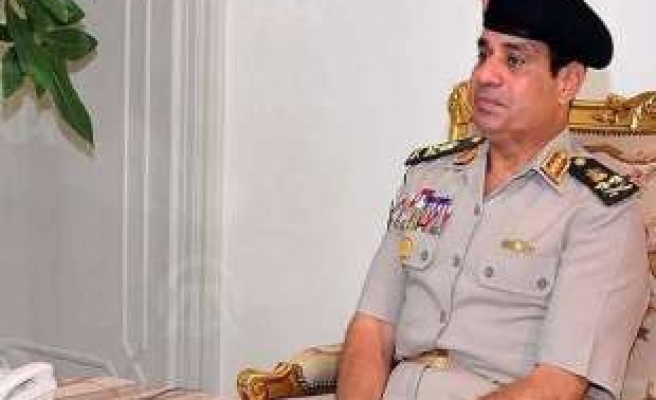 Egypt's National Salvation Front (NSF), a coalition of liberal and leftist parties which supported the July 3 military ouster of elected President Mohamed Morsi, has no problem supporting a candidate with a military background in the upcoming presidential polls.

"The NSF might support a candidate from outside its ranks, and it would not mind that candidate being from the military as long as he would be elected by the people and would shed his military uniform," Ahmed Said, a leading NSF figure, told the Anadolu Agency.

Said, the leader of the Free Egyptians Party, said the NSF will not decide on supporting a specific candidate until "things are clear whether the presidential polls would be held first."

Calls have grown in recent weeks for Defense Minister Abdel-Fattah al-Sisi, the man who announced Morsi's ouster, to run for president.

Several web pages and online campaigns have emerged, especially on Facebook, to drum up support for a Sisi presidential bid.

However, military spokesperson Ahmed Ali has repeatedly denied the general's intention to shed his uniform and run in the polls.

There are also speculations that former chief-of-staff Sami Anan and former premier and retired air force commander Ahmed Shafiq plan to run for the much-coveted post.

Shafiq lost the 2012 hotly-contested presidential run-off to Morsi, a leader of the Muslim Brotherhood.

The NSF wants the army-installed interim authorities to hold the presidential polls before parliamentary elections, contrary to the roadmap al-Sisi announced when overthrowing Morsi.

Initially led by reform campaigner Mohamed ElBaradei and former presidential candidates Amr Moussa and Hamdeen Sabbahi, the front was founded in November of last year to oppose what it described as the increasingly autocratic leadership of Morsi.

Now the coalition enjoys substantial representation in Egypt's military-installed interim government, while Moussa has been chosen to lead a 50-member committee tasked with amending the constitution suspended by the army.

ElBaradei has returned to his residence in Vienna.