The tanker bound for land-locked Uganda's capital Kampala rolled late on Tuesday on a busy highway that links Kenya and its hinterland. 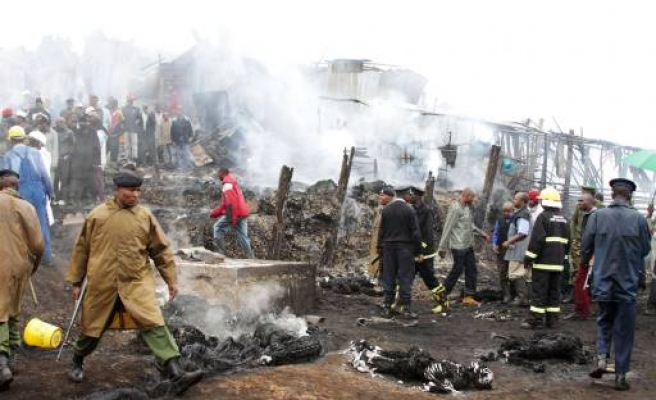 Four people were killed in western Kenya on Wednesday when an overturned petrol tank truck exploded into flames while residents were siphoning fuel, days after nearly 120 people died from a fire at a fuel spill in a slum in the capital.

The tanker bound for land-locked Uganda's capital Kampala rolled late on Tuesday on a busy highway that links Kenya and its hinterland.

A legislator from the region said residents had refused warnings to keep off the truck after it overturned.

"(This) officer pleaded with people to leave the scene... to leave the fuel, but they still did not," Sospeter Ojaamong, a local member of parliament, said.

Last week police warned Kenyans against trying to scoop up fuel from overturned tankers or burst fuel pipes. Those killed in the latest incident as in similar previous cases had hoped to sell the petrol on the black market, police and officials said.

In last week's fire in the capital, petrol spilled into an open sewer and ignited, sending a wave of flame through a Nairobi's densely-populated Sinai slum.

Police said at the time that many of the victims were trying to fill tanks with the spilled fuel to sell.

The Kenya Red Cross said the toll had risen to 119, after a number of patients with severe burns admitted at the country's largest public hospital died.

"So far, Sinai we are talking of 119, where 37 died at Kenyatta National Hospital, and 82 were bodies that were taken to the mortuary from the scene of the accident," Muluka-Oluoch said.

In January 2009, about 120 people died when a crowd scrabbled for free fuel around a tanker that crashed near the Rift Valley town of Molo.