One of the abducted girls freed in Nigeria

Police spokesman Emmanuel Ojukwu told reporters in Abuja that the 20-year-old woman had been "dropped off by suspected Boko Haram militants" at Mubi in Adamawa state, some 100 km (60 miles) from Chibok. 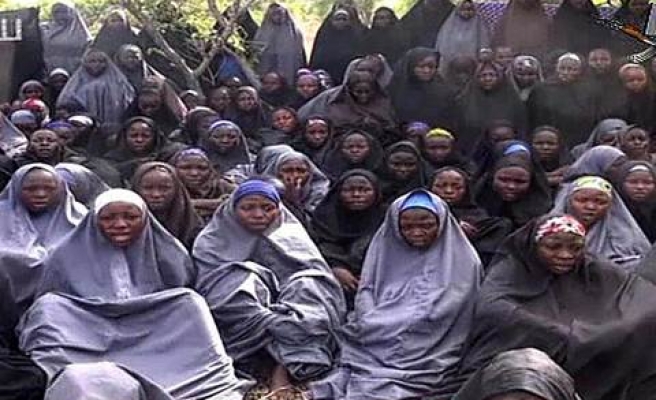 One of more than 200 schoolgirls abducted by Boko Haram rebels in the northeastern Nigerian village of Chibok was freed this week, police and a parent of some of the other missing girls said on Thursday.

Boko Haram militants took the girls from a secondary school in the village near the Cameroon border in April, sparking a worldwide outcry, and have remained in captivity ever since.

Nigerian President Goodluck Jonathan has been pilloried at home and abroad for his slow response to the kidnapping and for his inability to quell the violence by the militants, seen as the biggest security threat to Africa's top economy.

"She was found running in a village. She was in the bush for about four days. She's still receiving medical attention," said a parent, who has two girls still with the insurgents and who declined to be named.

He added that she was now in the northeastern city of Yola.

Police spokesman Emmanuel Ojukwu told reporters in Abuja that the 20-year-old woman was discovered on Wednesday, saying she had been "dropped off by suspected Boko Haram militants" at Mubi in Adamawa state, some 100 km (60 miles) from Chibok.

"Her condition is stable," he said, without explaining why she might have been released.

The militants offered last May a prisoner swap to release the girls, but the proposal was rejected by the government.

A military operation in the northeast has so far failed to quell the rebellion and has triggered reprisal attacks that are increasingly targeting civilians, after they formed vigilante groups to try to help the government flush out the militants.

Boko Haram militants on motorcycles killed at least 18 people in an attack on the northeast Nigerian town of Shaffa late on Wednesday, witnesses said on Thursday.

The attack late on Wednesday left bodies in the street, witness Amos Mshelia, who escaped by running into the surrounding bush and on to the nearby town of Biu, told Reuters by telephone.

"People ran out of their houses in fear, but unknown to many of us the insurgents were nearby and they were pursuing people, shooting as we were fleeing," he said.

Boko Haram has seized several towns in the last two months, although the military said on Wednesday it had pushed them back and that 135 fighters had surrendered this week.

It also said Nigerian troops had killed a man posing as Boko Haram leader Abubakar Shekau in several videos, including one in which he threatened to sell the girls into slavery. The military said last year that Shekau himself might have been killed.

Boko Haram gunmen carried away some 270 girls and women, aged from 13 to over 20, when they raided the Chibok school. More than 50 eventually escaped, but at least 200 remain in captivity, as do scores of other girls kidnapped previously.