Over a million Somalis at risk of starvation

The war-ravaged country is still struggling to cope with the impact of a 2011 famine that killed nearly 250,000 people. 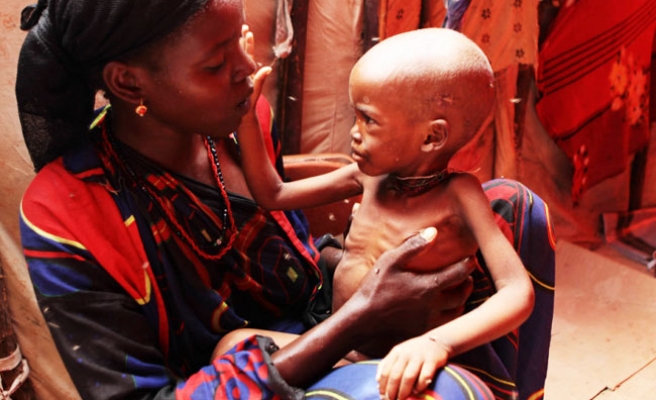 The U.N. on Tuesday warned that Somalia needed more than $500 million to save it from a "serious deterioration" in terms of food security.

"Over one million people in Somalia face acute food insecurity today, up by 20 percent from 857,000 six months ago," U.N. Humanitarian Coordinator for Somalia Philippe Lazzarini said in an assessment report released in Mogadishu.

"This brings the total number of people in need of humanitarian assistance or livelihood support to over three million," he added.

The U.N. Office for the Coordination of Humanitarian Assistance (UNOCHA) warned that Somalia could face its worst-ever humanitarian crisis if the international community failed to act swiftly.

"As many as 218,000 acutely malnourished children under the age of five require emergency nutrition supplement, access to clean water and better hygiene," said Lazzarini.

"Some 43,800 children are so severely malnourished that they will die if they do not receive medical treatment and therapeutic food," he warned.

The war-ravaged Horn of Africa country is still struggling to cope with the impact of a 2011 famine that killed nearly 250,000 people.

By then, starving people in Bay, Bakool and parts of the Lower Shabelle and Hiraan regions – controlled at the time by the Al-Shabaab militant group – could not access assistance, either because aid workers were concerned about the lack of security or because they were denied access by the militants.

The offensive has seen the militant group lose most of its strongholds, except for the port of Barawe. The port is believed to be Al-Shabaab's main source of revenue, generating millions of dollars from the illegal sale of charcoal to the Middle East.