Over hundred arrested in Mozambique after food riots

Almost 150 people have been arrested in Mozambique in the wake of riots last week over soaring bread prices, the country's state-run radio reported. 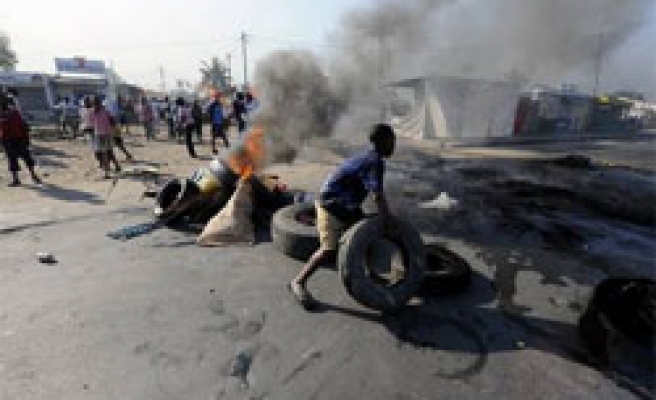 Almost 150 people have been arrested in Mozambique in the wake of riots last week over soaring bread prices in which 10 people were killed, the country's state-run radio reported on Monday.

Opposition parties and human rights groups have criticised the government, saying it failed to gauge the anger that would be unleashed by the 30 percent bread price rise and increases in water and electricity tariffs.

It quoted police spokesman Joaquim Selemane as saying police were attempting to identify the "ringleaders" of the protests, which were organized by cell phone text messages and which left hundreds of people injured.

He told the broadcaster that 142 people "were arrested for burning tyres and property destruction plus six suspected of sending text messages" to incite the protests.

A 30 percent rise in the price of bread has sparked anger in one of the world's poorest countries, but the government has said it is helpless in the face of soaring global wheat prices.

Drought and fires in Russia, which had been the world's No. 3 wheat exporter, and a decision by the Russian government to extend a grain export ban until late 2011, have helped to boost benchmark U.S. wheat prices by more than 25 percent this year.

Analysts say food prices will further stoke inflation which surged to more than 14 percent in June from decade lows last year of close to three percent but they expect investor appetite to remain undiminished for the country's natural resources.

"I really do not think it is going to affect investor sentiment in the longer term. The investments there are mostly in big projects like coal and gas," said Christie Viljoen, an economist at NKC Independent Economists.

Mozambique's capital Maputo was rocked last week by the riots. Protests also erupted in the central town of Chimoio and Matola, an industrial suburb of the capital.

Although Mozambique is one of the fastest growing economies in Africa, it has never fully recovered from its civil war, which ended in 1992. Income disparities are glaring and poverty remains gut wrenching.

Egyptians also protested over food prices in recent months, and analysts have been warning that riots could follow the jump in food prices in Africa and the Middle East.

There were global food protests and riots in 2008 when the price of wheat and other farm commodities climbed steeply.