Pistorius could still be found guilty of culpable homicide, the equivalent of Britain's manslaughter, if Masipa believes the athlete was negligent in shooting dead Steenkamp. 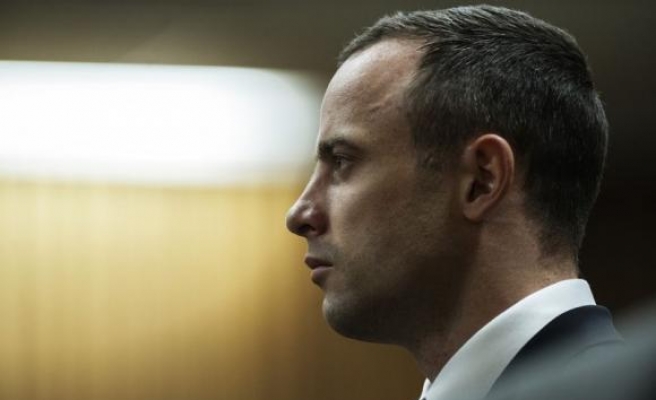 Oscar Pistorius was cleared on Thursday of murdering girlfriend Reeva Steenkamp but the Olympic and Paralympic track star faces a troubled night after the South African judge adjourned for the day before ruling on a charge of culpable homicide.

The double-amputee, once one of the biggest names in world athletics, has reason to fear a guilty verdict after Judge Thokozile Masipa adjourned seconds after saying key elements of the culpable homicide charge were satisfied when he shot Steenkamp dead on Valentine's Day last year.

"I am of the view that the accused acted too hastily and used excessive force. It is clear that his conduct was negligent," she told the packed courtroom before adjourning until Friday. She also said he had not acted "reasonably".

Earlier, Masipa ruled that prosecutors, led by the combative Gerrie Nel, had failed to prove the 27-year-old intended to kill Steenkamp after an argument.

The defence said Pistorius shot Steenkamp as a result of a tragic accident after mistaking her for an intruder hiding behind a locked toilet door.

As Masipa delivered her not-guilty decision on the primary charge of premeditated murder, Pistorius, who would have faced at least 25 years behind bars if convicted, sat sobbing in the dock, tears streaming down his cheeks.

Culpable homicide - the South African equivalent of Britain's manslaughter - carries up to 15 years in prison but has no minimum sentence.

Although Masipa described Pistorius as a "very poor" and "evasive" witness, she said it did not mean he was necessarily guilty in a case heavily reliant on circumstantial evidence.

"The state has not proved beyond reasonable doubt that the accused is guilty of premeditated murder," she said. "There are just not enough facts to support such a finding."

She then proceeded to absolve Pistorius of a lesser murder charge that requires a different concept of intention, known by the legal term 'dolus eventualis', which holds you responsible for the foreseeable consequences of your actions.

"Clearly he did not subjectively foresee this as a possibility that he would kill the person behind the door - let alone the deceased - as he thought she was in the bedroom," she said.

Legal experts said the state might question this ruling.

"I think the verdict on premeditated murder is acceptable and well reasoned and not a surprise," said Stephen Tuson, a law professor at Johannesburg's University of Witwatersrand.

"However, on dolus eventualis, I think the state would arguably be able to appeal," he added.

As the 66-year-old former Soweto crime reporter began her methodical review of the 41-day trial - which also included charges for three unrelated firearms offences - a pained and forlorn Pistorius bowed his head in the dock.

Masipa, only the second black woman to rise to the bench in South Africa, read out her verdict calmly and seemingly impervious to the global interest in a case that has drawn comparisons to the 1995 murder trial of American football star OJ Simpson.

In one early blow to Pistorius, she said defence allegations of police contamination of the crime scene "paled into insignificance".

However, as she drew up a detailed timeline of the shooting, she questioned the reliability of multiple state witnesses, including that of a neighbour who testified to hearing the terrified screams of a woman before and during shots.

She also rejected a mass of instant messaging evidence presented by both prosecution and defence to suggest, respectively, that the couple's relationship was on the rocks or loving and strong.

"Normal relationships are dynamic and unpredictable most of the time, while human beings are fickle," she said. "None of the evidence of a loving relationship, or a relationship turned sour, can assist this court."

The case has transfixed millions around the world who admired Pistorius, a man whose lower legs were amputated as a baby but who reached the semi-finals of the 400 metres at the London Olympics in 2012 running on carbon-fibre prosthetics.

That same year, Time magazine included him in its list of the world's 100 most influential people, "the definition of global inspiration".

In sports-mad South Africa, the shooting caused an even bigger impact, the stunning downfall of a sporting hero feted by black and white alike in a society still divided by its racist past.

The case continued to inflame passions even after Masipa delivered her decision.

"We are here in support of all women who have been abused or killed by their partners," said supermarket worker Joyce Radebe, who took the day off to demonstrate outside the court with members of the Women's League of the ruling African National Congress.

Theatrical prosecutor Nel, who had painted Pistorius as a gun-obsessed hot-head who whooped with joy when he blew apart a water-melon with a high-calibre pistol, was forced to watch as Masipa zeroed in on the few hard facts, brushing aside his courtroom antics and attempts to discredit the athlete.

However, the prosecution's case forced democratic, post-apartheid South Africa - glued to the live television feed - to ask itself some uncomfortable questions.

Foremost among them were queries about male attitudes to weapons and violence and the reality of whites and blacks still inhabiting largely different worlds two decades after the end of white-minority rule.

Why, commentators asked, of more than 30 witnesses called were only two - a security guard and police ballistics expert - black?

Why, Masipa aside, were nearly all the leading protagonists white in a nation where whites are just 10 percent of the population?

Would a much-maligned justice system stand up to scrutiny against a top-notch and well-funded defence team?

And, as backdrop to it all, the universal white suburban fear: how to protect yourself from an intruder - assumed to be black - in the middle of the night, a fear hardwired by years of apartheid propaganda about the 'swart gevaar', Afrikaans for 'black danger'.