Culpable homicide - South Africa's equivalent to manslaughter - carries up to 15 years in prison. 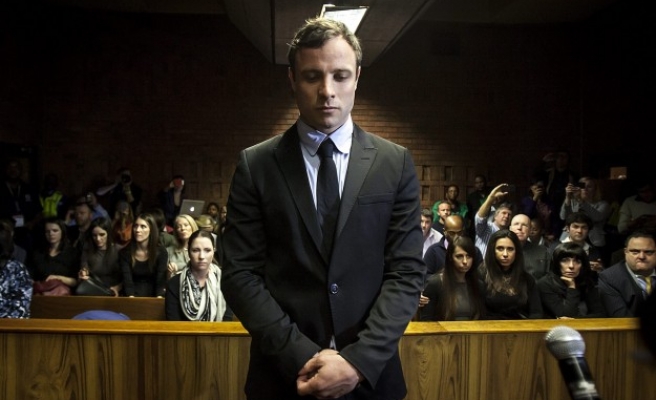 Olympic and Paralympic track star Oscar Pistorius was convicted of culpable homicide on Friday, escaping the more serious charge of murder for the killing of his girlfriend, and will now battle to avoid going to prison.

The 27-year-old double amputee, who became one of the biggest names in world athletics, stood impassively in the dock, his hands folded in front of him, as Judge Thokozila Masipa delivered her verdict.

Pistorius was also convicted of firing a pistol under the table of a packed Johannesburg restaurant but cleared of two other firearms charges - illegal possession of ammunition and firing a pistol out of the sun-roof of a car.

Masipa based her culpable homicide decision on the fact Pistorius had acted negligently when he fired four shots from a 9mm pistol into a toilet door in his luxury Pretoria home, killing Steenkamp, who was behind it, almost instantly.

He said it was a tragic error after he mistook her for an intruder.

Culpable homicide - South Africa's equivalent to manslaughter - carries up to 15 years in prison but, given Pistorius's lack of previous convictions, he could avoid a custodial sentence altogether, legal experts said.

Masipa set sentencing for Oct. 13 and granted a bail extension. Flanked by police and bodyguards, a stone-faced Pistorius made his way out of the court through a scrum of reporters, television cameras and on-lookers.

"We never had any doubt about Oscar's version of events," his uncle Arnold Pistorius told reporters after the verdict. "It won't bring Reeva back, but our hearts go out to her family and friends."

South Africa's National Prosecuting Authority said it was "disappointed" not to have secured a premeditated murder conviction, but would not make any decision about an appeal until after sentencing.

Masipa's decision also sparked anger outside the court, particularly among those campaigning for women's rights in a country with high levels of violent crime against women and children.

One aspect of the ruling has also sparked legal controversy, turning ordinary South Africans into overnight armchair experts on the vexed issue of 'dolus eventualis', a concept of intent that holds a person responsible for the foreseeable consequences of their actions.

While Masipa ruled that prosecutors had failed to prove explicit premeditation to kill Steenkamp - a decision that had been anticipated by many legal experts - she also cleared Pistorius of murder dolus eventualis.

A 2008 paper by KwaZulu Natal law professor Shannon Hoctor explained dolus eventualis as when a person "foresaw the possibility that the act in question ... would have fatal consequences, and was reckless whether death resulted or not".

Masipa said the state had not proven that Pistorius had foreseen such a possibility. She did, however, find on Thursday that: "A reasonable person would have foreseen if he fired shots at the door, the person inside the toilet might be struck and might die as a result."