Policemen fired tear gas on the demonstrators who used masks to reduce the suffocating effect of the tear gas. 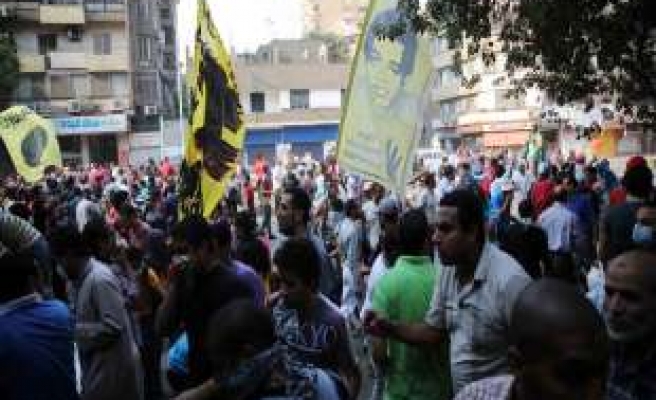 Pro-democracy marches have got closer to central Cairo's Tahrir Square on Sunday from different parts of the Egyptian capital and the adjacent Giza province.

Egypt's security forces have been using tear gas to block the marching protesters from reaching the iconic square.

Activists participating in the marches hope to make it to the square, the iconic center of the revolution against Egypt's former president Hosni Mubarak in 2011, to protest the army's July 3 ouster of elected president Mohamed Morsi.

The authorities have taken unprecedented security measures to prevent the demonstrators from reaching Tahrir.

Even with this, some of the demonstrators have managed to arrive to the vicinity of Tahrir, particularly the Qasr al-Eini Street, which leads to the square, from the residential areas of Maady and Old Cairo.

Policemen fired tear gas on the demonstrators who used masks to reduce the suffocating effect of the tear gas.

Some demonstrators used vinegar to defy the fumes.

Another march made it to Qasr al-Nil Bridge, which leads to Tahrir Square, from Giza's al-Haram Street and Mohandessen neighborhood.

Several demonstrators suffocated from inhaling the tear gas as they performed the midday prayer at a mosque in the downtown Cairo neighborhood of Dokki, which is located in close proximity to Tahrir Square.

Fire caught one of the buildings facing the mosque, but eyewitnesses say some unidentified people were on near rooftops throwing Molotov cocktails on the pro-democracy demonstrators.

Around 20 people were injured so far, eyewitnesses said.

Some of the injuries happened because of gunfire.

Clashes are still continuing on central Cairo's Ramses Square between policemen and pro-democracy demonstrators who want to cross into the nearby Tahrir Square.

Celebrating with an eye on Morsi's backers

Marches and protests in support of deposed Egyptian president Mohamed Morsi are not absent from the minds of Egyptians celebrating the 40th anniversary of the 1973 victory over Israel in central Cairo's Tahrir Square.

As Egyptians played patriotic songs and danced with these songs in the background to greet their army, their merriment was mixed with worry amid reports that Morsi supporters plan to flock to Tahrir Square.

Participants in the Tahrir Square celebrations keep asking each other about where the pro-democracy activists had reached and far close have they come to Tahrir.

Some people even seem to be prepared for confrontations.

Others, however, still preferred to stay away from the square to avoid being caught in the middle of fighting between the two groups.

The authorities have beefed up security measures around Tahrir Square in preparation for the arrival of the pro-democracy demonstrators.

Those who want to enter Tahrir Square need to pass through metal detectors and undergo strict search measures.

Meanwhile, the authorities had succeeded in arresting a man who wore a shirt that had the now-famous Rabaa sign on it.

Some pro-democracy supporters have posted on their Facebook pages photos for them inside Tahrir Square while carrying the photos of Defense Minister Abdel-Fattah al-Sisi to signal their ability to deceive the security forces who are deployed at the gates of the square.