Students protest against proposed fee rises, which will mean that poorer black youths will be unable to attend universities 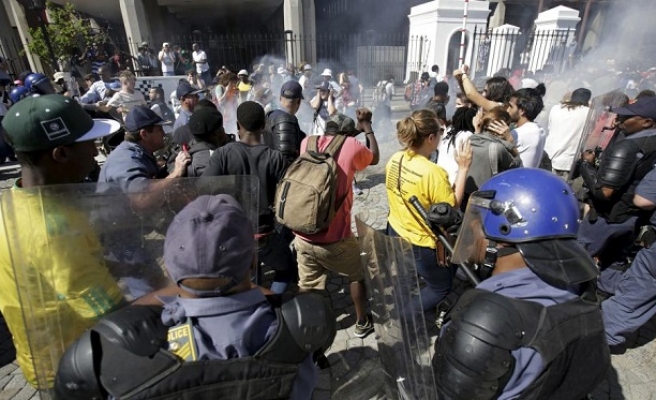 Thousands of students gathered near the Union Buildings, where President Jacob Zuma was set to address the crowd after meeting student leaders and university officials following  several days of growing protests.

Protesters tore down sections of a security fence, set fire to portable toilets and hurled bricks at police lines in chaotic scenes.

The Union Buildings are the official seat of the South African government and where Nelson Mandela was inaugurated as president when white-minority apartheid rule fell in 1994.

Campuses around the country have been closed over the last week as students have protested against the proposed fee rises, which they say will mean poorer black youths are unable to attend university.

The issue of education fees has ignited widespread frustration over a lack of opportunities for young people since the end of apartheid, worsened by a weakening economy and high unemployment.

"A proposed increase in university fees has angered students, given the financial difficulties faced by students from poor households," Zuma's office said in a statement.

"The president will use the meeting to gain a first-hand account from students."

It said that universities set their fees independently, in an apparent attempt to steer criticism away from the African National Congress (ANC) government that has ruled since 1994.

"The government thinks we are playing, they think it's because we want to run away from school," Kgotsi Genge, a 22-year-old student at the University of Pretoria, said at the protest in the capital.

"But we will keep fighting. South Africa needs to invest more in education. This movement is because we are being oppressed."