Prosecutors said that police officer Abdel Hakim had initially told the prosecution during their probe that he was given 300 shotgun cartridges, but in court he denied this. 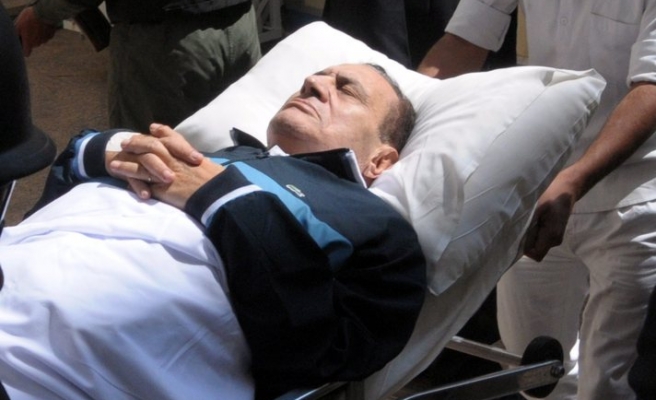 Egyptian prosecutors accused a police officer of giving false testimony on Wednesday in an often heated session in the trial of Hosni Mubarak over his role in the killing of protesters.

Lawyers acting for families of some of the 850 people killed in the uprising that ousted the Egyptian president have complained that some police witnesses changed their accounts and accused the prosecution of failing to build a strong case.

The 83-year-old Mubarak, who has been in hospital since April, has attended the trial on a stretcher inside a defendants' cage in court. He is charged with conspiring to kill protesters and "inciting" officers to use live ammunition.

Police witnesses in Monday's session had suggested that neither the former president nor his former Interior Minister Habib al-Adli, who is also on trial, gave any orders to shoot, and one officer on Wednesday told the court that police were instructed not to take their guns to protests.

Prosecutors said that police officer Abdel Hakim had initially told the prosecution during their probe that he was given 300 shotgun cartridges, but in court he denied this.

"The guns were not allowed to be with the unit. The instructions were for officers not even to take their personal guns," said Abdel Hakim.

Judge Ahmed Refaat said Hakim would be held in a separate room pending a decision on his testimony. When he was removed, one lawyer shouted after him: "You liar, you liar. You have been paid. This is the blood of your brother."

Mubarak, who was driven from office after three decades in power on Feb. 11, is the first Arab leader to stand trial in person since unrest erupted across the Middle East this year.

The judge looked to the cage and asked defendants if they had comments. Mubarak responded: "No I have no comment".

"Shot in the head by the police"

The judge suspended proceedings at one point to restore calm and also defended the work of the prosecution against criticism from lawyers acting for victims' families.

"They are men of law and justice. They must be respected. They have done great work in investigating this case," he said.

"My friend dropped dead in Tahrir Square right next to me. He was shot in the head by the police," said Rabia al-Sheikh outside the court. "Why don't they let us inside to testify. Why are they calling on police to testify and not the people?"

There was a heavy police presence outside the court on the outskirts of Cairo. But there was no repeat of the scuffles and stone throwing that erupted between Mubarak's supporters and opponents there during the previous sessions.

Inside the court, one lawyer representing families of the victims requested that the court hear the testimony of Field Marshal Mohamed Hussein Tantawi, who heads the ruling military council and was Mubarak's defence minister for 20 years.

A top police officer told the court on Monday he was not aware of any order to fire on protesters, although he said police were given live ammunition to protect the Interior Ministry.

General Hussein Saeed Mohamed Moussa, in charge of communications for state security, said he believed the decision to issue arms was taken by a senior police officer, Ahmed Ramzi.

Ramzi is one of six officers standing trial with the former interior minister, the ex-president and Mubarak's two sons Alaa and Gamal.

Alaa shook his head inside the cage at one point when a lawyer acting for victims' families tearfully addressed the court saying: "Mubarak was the worst president Egypt has ever seen."