Protests coincide with the 40th anniversary of the 1973 victory over the Israeli army, an occasion that is widely seen as a day of national pride for the Egyptian military 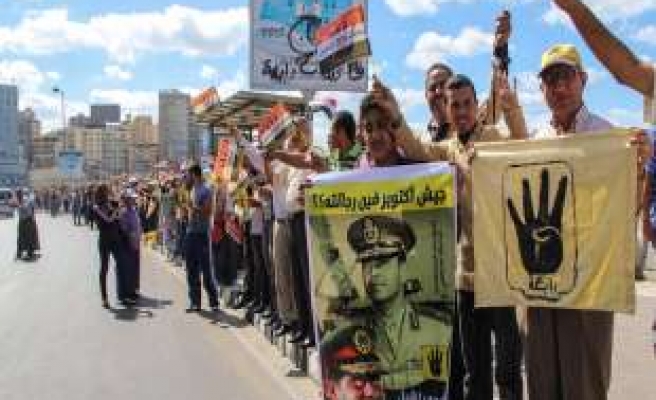 The protests coincide with the 40th anniversary of the 1973 victory over the Israeli army, an occasion that is widely seen as a day of national pride for the Egyptian military.

"October 6 will be your last day," the demonstrators chanted.

They raised the photos of the deposed president and the now-famous four-finger Rabaa Sign, which became the symbol of the six-week protest camp in Rabaa al-Adawiya Square, which was brutally crushed by security forces on August 14.

The protesters also held photos of some of the army generals of the October war, during which Egypt liberated the Sinai Peninsula, which was occupied by Israel in 1967.

Similar marches were also organized in the southern provinces of Beni Sueif and Aswan.

In Aswan, the authorities arrested ten students from the pro-democracy Students against Military Coup protest movement when they organized a demonstration against the military ouster of Morsi.

The authorities had also arrested a member from the anti-Morsi Tamarod (Rebellion) group because he rejected the arrest of the students, according to eyewitnesses.

At least three were killed and seven injured in clashes between security forces and pro-democracy supporters on Sunday in the Upper Egyptian village of Dalga in Minya province, medical sources told Anadolu Agency.

The violence erupted when a pro-democracy march approached a site manned by security forces chanting slogans against the army and police.

Security sources claimed some protesters hurled stones at the security forces and were armed.

The Muslims Brotherhood's website claimed the three were killed by live ammunition fired by the police and army forces.

Last month, joint police-army forces stormed Dalga and dispersed a 75-day sit-in staged by Morsi supporters, arresting many of them.