'Rabaa' notebooks are sold under counter

While storeowners do not deny the existence of such notebooks, many of them deny having links to them 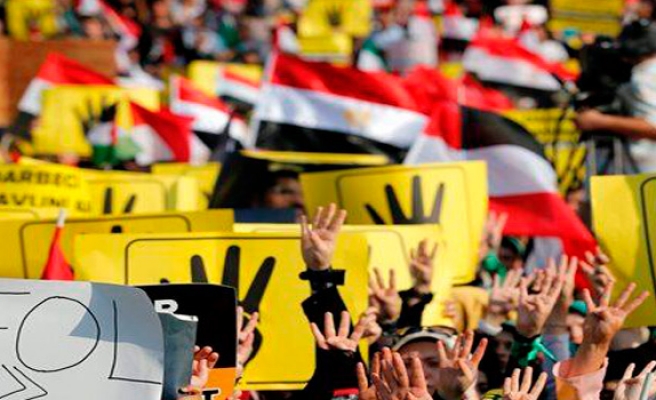 As the school year kicks off in Egypt, a new notebook is being sold in the nation's school supply shops. But this notebook can only be obtained from under the counter.

The cover of the new notebook is adorned with the bright yellow "Rabaa sign" – the four-fingered salute that has become the symbol of the Rabaa al-Adawiya sit-in, set up by supporters of ousted president Mohamed Morsi in late June and violently crushed by Egyptian security forces in mid-August.

"I personally don't sell the notebook because I oppose the Muslim Brotherhood," Mohamed Gamal, a trader at the Fagallah market for school supplies, told Anadolu Agency. "But it can be found at several stores."

Shops at the market do not openly display the Rabaa notebooks as they do the other notebooks, said Gamal. But many traders are nevertheless ready to sell them to patrons they personally know.

While storeowners do not deny the existence of such notebooks, many of them deny having links to them.

"How can I sell these notebooks while all these security measures are being taken against anything that has anything to do with the Muslim Brotherhood?" asked one store worker.

Speaking on condition of anonymity, he added that some customers had specifically asked for the notebooks.

Another stationery store worker agreed, saying the Rabaa-marked notebooks were being sold at major school supply shops, but that many store owners were fearful of openly selling them to the public.

Storeowners, for their part, are hoping that the seasonal demand for school supplies might offset some of the losses they have recently suffered due to Egypt's unrelenting political turmoil.

"Friday used to be a good day for business," said market worker Wael Gamal. "But the current political turbulence is destroying our prospects. Customers no longer come on Fridays [which usually coincide with nationwide pro-democracy demonstrations]."

Gamal, however, says the current turmoil is having little effect on overall business, stressing that few Egyptians can do without the goods he peddles.

Ragab Mohamed Shaaban, a father of two at the market to buy his children's school needs, nodded in agreement.

"We have to buy this stuff regardless of Egypt's deteriorating economic conditions," he said.

A recent Education Ministry decision exempting students at state-run schools from paying tuition fees, said Shaaban, has been the lone piece of good news for parents.