Anti-Gaddafi fighters had been camped since late June on heights overlooking the town, unable to advance. 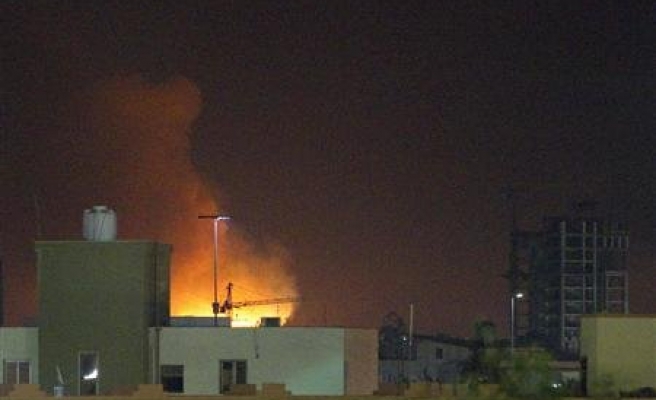 Libyan rebels who seized the town of Bir al-Ghanam 80 km (50 miles) south of Tripoli said on Monday they would push on towards the capital, Muammar Gaddafi's stronghold, but expected a tough fight.

The small desert settlement is now the closest rebel position to Tripoli and its capture at the weekend is likely to inject some new momentum into a six-month campaign to oust Gaddafi which has been faltering over the past few weeks.

Anti-Gaddafi fighters had been camped since late June on heights overlooking the town, unable to advance. According to rebels in the town on Monday, they moved in on Saturday under cover from NATO warplanes.

They said their next target was Zawiyah, a town on the Mediterranean coast 50 km west of Tripoli.

Zawiyah was the scene of two failed uprisings against Gaddafi's rule since February. Many of the fighters in Bir al-Ghanam are from there, although many of those who took part in uprisings are now in government prisons or dead.

"Our aim is to get to Zawiyah. Once we do that Gaddafi is finished," said rebel fighter Murad Bada, who was sitting under the shade of a tree and humming a song about Zawiyah.

Rebel progress on the battlefield has been slower than Western countries expected when they began air strikes against Gaddafi in March. The rebels have been hampered by divisions, revealed starkly 12 days ago when their military chief was assassinated in circumstances yet to be fully explained.

Libyan rebels on Monday dissolved their executive committee, or cabinet, after what they described as "administrative errors" in the handling of the shooting of Abdel Fattah Younes.

The 14-member committee, including officials responsible for defence and interior affairs, was sacked and a new one will be nominated by Prime Minister Mahmoud Jibril, said National Transitional Council (NTC) media director Shamsiddin Abdulmolah.

Younes was killed on July 28 after being taken into custody by his own side for questioning, throwing into question NTC unity just as it was winning broader international recognition.

"They've all been dismissed," Abdulmolah told Reuters. "There were administrative errors that they were held responsible for."

Opposition leaders linked the killing of Younes, a former interior minister under Gaddafi who defected early in the revolt, to elements loyal to the Libyan leader.

The capture of Bir al-Ghanam was the biggest rebel breakthrough in weeks of largely static fighting on three fronts across Libya. But that alone is not enough to undermine Gaddafi's grip on power.

The small rebel force approaching from the south could face much stiffer resistance as it draws nearer to the capital, where Gaddafi's troops are concentrated and where he can count on a certain level of popular support.

The rebel advance elsewhere has been hampered by divisions and infighting, as well as a lack of experience in warfare.

Abdelsalam, a rebel spokesman in Misrata, another rebel stronghold west of Benghazi, said one fighter was killed in a shelling attack in Dafiniya, a village on the road to Zlitan, the next major town in Gaddafi's hands on the road to Tripoli.

"There is progress on the front, but it is very slow. Entering Zlitan is very tricky. We are trying to enter ... from open farmland. We also need an uprising against Gaddafi's forces by residents in Zlitan. Taking Zlitan and advancing toward Tripoli is going to take months if not years," he said.

Rebel officials in the east said they had created a security force to protect oil installations, a step which could allow them to resume crude exports and earn badly-needed income.

The rebels stopped pumping oil to Mediterranean Sea export terminals under their control after pro-Gaddafi raiding parties attacked oil facilities in the desert. A spokesman in the stronghold of Benghazi said an armed force had been created to protect the oil fields, equipped with night-vision equipment.

Libya's prime minister on Sunday said government forces were in control of Bir al-Ghanam after fighting off a rebel attack. But in the town early on Monday, the only sign of government forces was the weaponry they had left behind when they fled.

Three tanks were burned out. One still on a transporter lay next to a deep crater apparently caused by a NATO air strike.

One fighter said five rebel fighters were killed taking the town, including a Libyan-American father and son, part of a large contingent of foreigners with Libyan roots who have come back to fight against Gaddafi.

If NATO's commitment to the campaign were to waver, it could give Gaddafi an opportunity to hold on to power. Some alliance members are unsettled by how long it is dragging on and how much it is costing, especially at a time of economic uncertainty.

The head of the U.N. cultural agency UNESCO sharply rebuked NATO on Monday for a July 30 air strike on Libyan state TV in which several people were killed.

"I deplore the NATO strike on Al-Jamahiriya and its installations," UNESCO director Irina Bokova said. "Media outlets should not be targeted in military actions."

Some Western capitals doubt whether the rebel leadership can hold the country together if Gaddafi is no longer in charge.

But for now, at least, there is no sign of any let-up in the NATO bombing campaign. The alliance says the air strikes are to protect civilians from Gaddafi's forces but there is clear evidence of NATO coordinating attacks with rebel offensives.