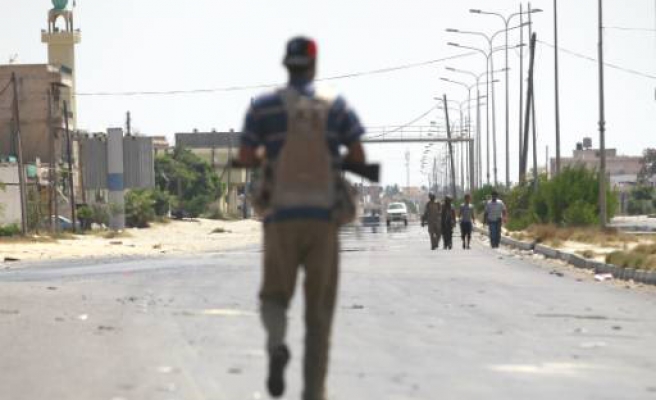 Libyan rebels launched an assault on Wednesday to drive forces loyal to Muammar Gaddafi out of a strategic city on Tripoli's outskirts, and said that encircled Gaddafi troops had abandoned two towns further west.

After 41 years of supreme power, the 69-year-old Gaddafi is looking isolated, with reinvigorated rebel forces closing in on the capital from the west and south and cutting off its road links to the outside.

The rebels, aided by a NATO bombing campaign, have transformed the battle in the last few days by seizing most of the city of Zawiyah on Tripoli's western outskirts, as well as a town to the south, cutting Tripoli's two main supply routes.

A rebel spokesman said remnants of Gaddafi's forces further west -- now cut off from the capital and effectively encircled following the capture of Zawiyah -- had abandoned two towns and were retreating toward the Tunisian border.

"Gaddafi's forces this morning withdrew from the towns of Tiji and Badr because they felt surrounded from all sides," said the spokesman, named Abdulrahman, by telephone from Zintan, a rebel headquarters in the Western Mountains.

"The revolutionaries have now entered Tiji and Badr. The (Gaddafi) brigades retreated to Zuwarah and Jameel, near the Tunisian border. I think they will surrender soon because roads to Tripoli are closed," he added.

The account could not be independently confirmed. Gaddafi's government has played down the rebel advances of the past week.

In Zawiyah, which controls the main highway linking Tripoli to the Tunisian border, Gaddafi forces have retained control of an oil refinery and have harassed the rebels with shelling and snipers on rooftops of tall buildings.

"There are some snipers inside the refinery facility. We control the gates of the refinery. We will be launching an operation to try to take control of it shortly," said rebel fighter Abdulkarim Kashaba.

Around noon, as an exchange of fire could be heard from the area, he said the operation was under way.

Under a bridge rebels loaded large-calibre ammunition into a car and headed towards the refinery for the assault. Other rebels could be seen speeding in that direction.

Gaddafi's green flags could be seen still flying from a refinery building and an electrical pylon. The rest of the city now flies the red, black and green flag used by the rebels.

The Zawiyah refinery has been one of the few sources of fuel for Gaddafi's troops and residents of the capital. The rebel commander in charge of the attack on it, Osama al-Arusee, said the pipeline linking it with Tripoli was severed on Tuesday. He said ten refinery workers were trapped by Gaddafi's troops who would not let them leave.

Elsewhere in the city, Zawiyah appeared quiet on Wednesday and under rebel control. The city was largely deserted and shops were boarded up, with clusters of rebel fighters in the streets.

Medical workers at a hospital on the outskirts said three people had been killed and 35 injured on Tuesday, most of them civilians, as Gaddafi's troops shelled the town and snipers fired from its rooftops.

An increasingly confident rebel leadership has dismissed reports that it was holding secret talks with representatives of the Libyan leader in neighbouring Tunisia.

Libya's rebel National Transitional Council (NTC) denied negotiating with Gaddafi to resolve the conflict. Sources have said the two sides were meeting in Tunisia this week where a U.N. envoy has also arrived for talks.

"The NTC would like to affirm that there are no negotiations either direct or indirect with the Gaddafi regime or with the special envoy of the United Nations," said NTC leader Mustafa Abdel Jalil. Gaddafi must step down and leave Libya, he said.

In Washington, U.S. Defense Secretary Leon Panetta said Gaddafi's forces had been thrown back onto the defensive.

"I think the sense is that Gaddafi's days are numbered."

At a news conference for Libyan journalists broadcast by state television, government spokesman Moussa Ibrahim dismissed reports that Gaddafi's forces were on the run but acknowledged fighting in several locations rebels say they have captured.

"Some foreign politicians have said this regime's days are finished and it has weeks left," he said. They have been saying this for six months and we are still here."