NATO warplanes could be heard over Tripoli during the night, residents said. 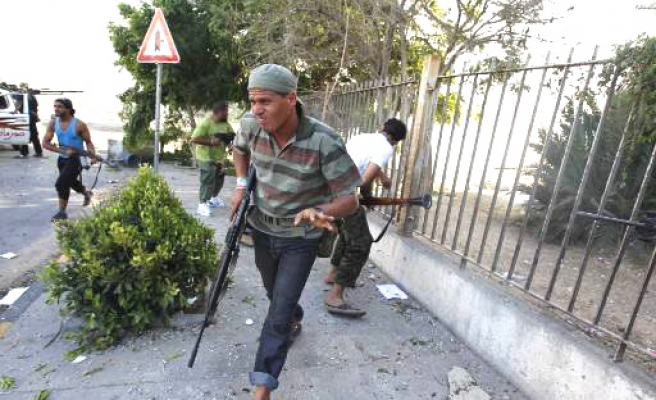 Libyan rebels said they were sending in special forces units in their hunt for fugitive strongman Muammar Gaddafi, whose supporters are now pinned down in pockets of resistance in the capital, Tripoli.

The rebel leadership announced it was planning to move from the eastern city of Benghazi, where the revolution to topple Gaddafi began six months ago, to govern the country from Tripoli.

Rumours of Gaddafi or his sons being cornered or sighted, swirled among excitable rebel fighters engaged in heavy machinegun and rocket exchanges. But even after his compound was overrun on Tuesday, hopes of a swift end to the war were still being frustrated by fierce rearguard actions.

The rebels' Colonel Hisham Buhagiar said they were targeting several areas to find Gaddafi: "We are sending special forces every day to hunt down Gaddafi. We have one unit that does intelligence and other units that hunt him down."

Loyalist forces are still present in several areas of the city, some of them flying rebel banners rather than the green flags of the Gaddafi era, Reuters correspondents said.

NATO warplanes could be heard over Tripoli during the night, residents said.

A measure of the rebels' grip on the capital will be apparent at Friday prayers later in the day. As the insurgency developed, Gaddafi's security forces saw the weekly worship as a protest and shot people as they exited mosques.

Powers have demanded Gaddafi's surrender and worked to help the opposition start developing the trappings of government and bureaucracy lacking in the oil-rich state after 42 years of an eccentric personality cult.

The United States and South Africa struck a deal to allow the release of $1.5 billion in frozen funds for humanitarian aid and other civilian needs, U.N. diplomats said.

But with loyalists holding out in the capital, in Gaddafi's coastal home city and deep in the inland desert, violence could go on for some time, testing the rebel government's ability to keep order when it moves from Benghazi.

"I proclaim the beginning of the resumption of the work of the executive office in Tripoli," Ali Tarhouni, in charge of oil and financial matters for the rebel council, said in Tripoli.

The shift is seen as a crucial step to smoothing over rifts in the country, fragmented by regional and tribal divisions, particularly between east and west.

Gaddafi taunted his enemies and their backers, calling on his supporters to fight back in the city in his latest broadcast rallying cry.

"The tribes ... must march on Tripoli," Gaddafi said in an audio message aired on a sympathetic TV channel on Thursday. "Do not leave Tripoli to those rats, kill them, defeat them quickly.

"The enemy is delusional, NATO is retreating," he shouted, sounding firmer and clearer than in a similar speech released on Wednesday. Though his enemies believe Gaddafi, 69, is still in the capital, they fear he could flee by long-prepared escape routes, using tunnels and bunkers, to rally an insurgency.

A pro-Gaddafi station said NATO warplanes had bombed his hometown of Sirte, one his last strongholds. While Britain's defence minister said NATO was providing intelligence assets to help the rebels find Gaddafi, the U.S. State Department said neither NATO nor Washington was involved in the manhunt.

Rebel leaders, offering a million-dollar reward, say the war will be over only when Gaddafi is found, "dead or alive".

Diehards numbering perhaps in the hundreds were keeping at bay squads of irregular, anti-Gaddafi fighters who had swept into Tripoli on Sunday and who were now rushing from one site to another, firing assault rifles, machineguns and anti-aircraft cannon bolted to the backs of pick-up trucks.

The lack of security will be just one of many challenges facing Libya's new masters as they try to meet the expectations of young men now bearing arms and to heal ethnic, tribal and other divisions that have been exacerbated by civil war.

Speaking in Italy, the head of the rebel government, Mahmoud Jibril said the uprising, the bloodiest so far of the Arab Spring, could fall apart if funds were not forthcoming quickly: "The biggest destabilising element would be the failure ... to deliver the necessary services and pay the salaries of the people who have not been paid for months."

In an interview with Reuters, the rebels' finance chief Tarhouni said the rebel government hoped to restart oil exports within two to three months and reach full volumes in about a year.

After a meeting of officials in Istanbul, the Contact Group of allies against Gaddafi called on Libyans to avoid revenge following reports that non-combatants had been killed.

"The participants attached utmost importance to the realisation of national reconciliation in Libya," it said. "They agreed that such a process should be based on principles of inclusiveness, avoidance of retribution and vengeance."

However, there was already evidence of the kind of bitter bloodletting in recent days that the rebel leaders are anxious to stop in the interests of uniting Libyans, including former Gaddafi supporters, in a democracy.

A Reuters correspondent counted 30 bodies, apparently of troops and gunmen who had fought for Gaddafi, at a site in central Tripoli. At least two had their hands bound. One was strapped to a hospital trolley with a drip still in his arm.

All the bodies had been riddled with bullets.

Elsewhere, a British medical worker said she had counted 17 bodies who she believed were of prisoners executed by Gaddafi's forces. One wounded man said he had survived the incident, when, he said, prison guards had sprayed inmates with gunfire on Tuesday as the rebel forces entered Gaddafi's compound.

Gaddafi's opponents fear that he may rally an insurgency, as did Saddam Hussein in Iraq, should he remain at large and, perhaps, in control of funds salted away for such a purpose.

Western powers, mindful of the bloodshed in Iraq, have made clear they do not want to engage their troops in Libya. But a U.S. State Department spokeswoman said Washington would look favourably on any Libyan request for U.N. police assistance -- something some say might aid a transition to democracy.

The United States and NATO are also deeply concerned about possible looting and resale of weapons from Libyan arsenals as Gaddafi's rule crumbles, though the U.S. State Department said it believed Libya's stocks of concentrated uranium and mustard agent were secure.

Nonetheless, many in Tripoli count themselves happy already that Gaddafi has gone. "I was nine years old when Gaddafi came to power and I've always hoped I wouldn't die before I saw this day," said Ali Salem al-Gharyani, choking back tears.

"I am now 50 years old and this is the first time, seeing Gaddafi gone, that I have experienced true joy in my life."