ICRC said in a statement armed men entered the Catholic mission in the northern town of Ndele, where four of its staff were based, and killed one of them, a Central African man. 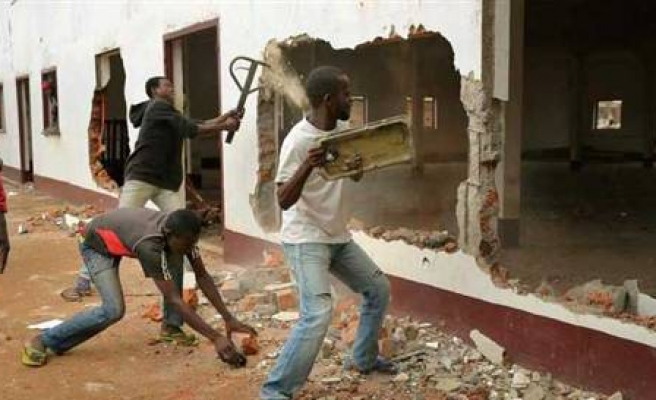 A Red Cross worker was killed on Saturday in the north of the Central African Republic, amid escalating religious violence that peacekeepers have been powerless to stop.

The International Committee of the Red Cross (ICRC) said in a statement armed men entered the Catholic mission in the northern town of Ndele, where four of its staff were based, and killed one of them, a Central African man. The remaining three are safe, it said.

The attack came after warnings last week that humanitarian workers were at risk in the former French colony and calls from senior U.N. officials for the international community to deploy more troops.

"We are outraged by this killing," said Georgios Georgantas, head of the ICRC delegation in the country.

"We urgently call on all those bearing arms to respect and spare people working for the ICRC or for the broader International Red Cross and Red Crescent Movement, and indeed all those who carry out humanitarian work," he said.

Since the resignation of Seleka leader Michel Djotodia as interim president in January under intense international pressure, Christian "anti-Balaka" militias have stepped up attacks against Muslims.

France has deployed 2,000 troops to support a 6,000-strong African Union peacekeeping mission in the country of 4.5 million people but they have failed to halt the violence.

On Friday, medical charity Medecins Sans Frontieres had warned that armed groups were attacking and robbing aid workers in the landlocked nation, making it difficult to bring humantarian relief.

The United Nations estimates that some 650,000 people have been displaced by violence within Central African Republic, while nearly 300,000 have crossed into neighhouring countries.

Despite the escalating violence and worsening humanitarian situation, the United Nations has received less than one fifth of the $551 million it requested from donors in December.

The Security Council on Thursday discussed a proposal for a nearly 12,000-strong peacekeeping force to stop the killing, but reached no decision.