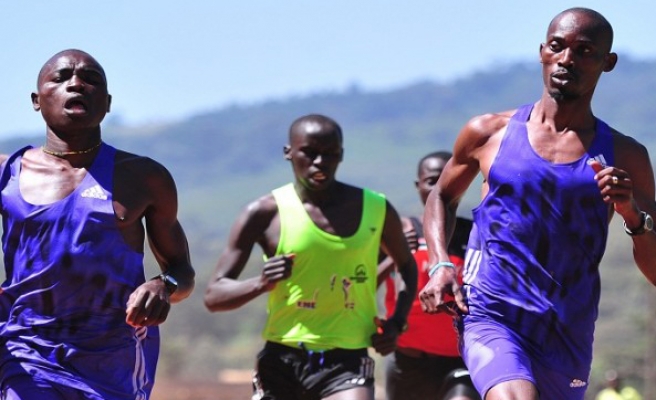 High up in Kenya's rugged Ngong Hills, refugees sprint around an athletics track in intensive training they hope will see them selected for a unique team for the Rio Olympics.

Hand-picked from Kenya's vast refugee camps -- including Dadaab, the biggest in the world -- to join the training camp just outside the capital Nairobi, the athletes here have their eyes set on racing in Rio de Janeiro in August.

"It will be a very great moment for me and the rest of the refugees, who will be so proud for having produced one of their own who has gone to the Olympics," said 22-year-old Nzanzumu Gaston Kiza, who fled Democratic Republic of Congo after his relatives were massacred in ethnic clashes.

Here at Ngong, a high altitude running track some 2,400 meters (7,875 feet) above sea level, some 40 kilometres (25 miles) southwest of Nairobi, athletes from across eastern Africa are chasing the dream of the Olympics.

Amid a world record number of people forced from their homes and their countries, the International Olympic Committee (IOC) this month announced the creation and funding of Team Refugee Olympic Athletes (ROA) to compete in Rio under its flag.

The team, expected to include between five to 10 athletes from across the world, is part of the IOC's "pledge to aid potential elite athletes affected by the worldwide refugee crisis".

"Team ROA" will march just before the hosts Brazil enter the Olympic Stadium at the opening ceremony -- carrying the Olympic flag and anthem -- a position likely to be given enormous cries of support.

While countries may field their own teams, the refugees are unable to return home safely to take part - and instead will run under the Olympic flag.

"We want to send a message of hope for all refugees in our world," IOC president Thomas Bach said when plans for the team were announced.

At this camp in Kenya -- training in fierce equatorial sunshine at high altitudes that would leave many breathless -- athletes include runners from DR Congo as well as war-torn South Sudan and Somalia.

"It is a very good opportunity for us," said 22-year-old Angelina Ndai, a 1500-metre hopeful from South Sudan. "I will feel so proud to be there and to be recognised as a South Sudanese."

It is not the first time athletes have run under the IOC flag: fellow South Sudanese Guor Mading Maker ran in the London 2012 marathon as an independent Olympian -- under the name Guor Marial.

At that time, newly independent South Sudan had not yet been accepted as an IOC member. Today it is a member, but Ndai is among the more than two million people forced to flee the world's youngest nation, which has been in civil war for more than two years.

"We are here, and we believe we will move forward," Ndai said.

The athletes' abilities are in no doubt, but it has been far from easy for most to shift from the crowded camps to the track.

Runners picked up injuries at the initial stages, with many forced to quit to return to the refugee camps.

"We have been training hard, even though our bodies have been responding negatively, because we got lots of injuries," Ndai told AFP.

"When the athletes came here, they not in shape, they were a zero," Anzrah told AFP.

"We should remember that these were people living in camps and we had to start them from somewhere."