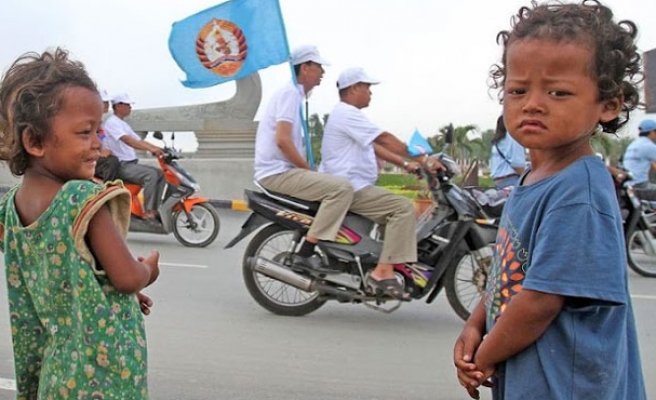 A report based on interviews with 54 children has exposed critical failings in Cambodia’s judicial system, recounting stories of unpleasant experiences in the presence of police, doctors and court rooms.

UNICEF and Hagar, a child rights NGO based in Cambodia, released Wednesday “A System Just for Children,” a report which UNICEF’s Cambodia representative said is original in drawing directly from children’s lived experiences with critical gaps in the judicial system.

“The report provides us with an opportunity to hear from the most vulnerable,” Rana Flowers said.

“The goal is to treat them with dignity, to protect their rights, provide them with support to exit that system and not return,” she added. “We must ensure they aren’t re-victimized by our approach and failure to protect them.”

Examples of this re-victimization are scattered throughout the report, highlighting a number of glaring problems with regard to how children are treated.

Child victims in 10 cases were laughed at, mocked or ignored by police officers upon reporting crimes, and twenty percent of families had to pay bribes of up to $50 before police would act upon the complaints they filed.

The report found that few children had been able to discuss their cases with their appointed lawyers, and some were only able to do so on the steps of the courthouse.

While “nearly every child” interviewed had been exposed to their attacker on the way to or in the court room, one participant was first questioned by a lawyer “in a van on the way to the courthouse, with the perpetrator also in the van.”

The courtrooms, meanwhile, were rarely emptied out -- enabling strangers and the media to listen in -- and although some were provided with screens to hide the identities of those testifying, they were rarely used.

Despite the majority of the victims of sexual abuse being girls, less than 10 percent of them were able to meet with or be examined by female doctors.

One teenage victim of rape said a doctor was very dismissive when she mentioned the pain of a forensic internal examination after being attacked, and she was told not to complain.

“It is stunning the honesty, the detail we can get if we stop and listen to them [the children],” Flowers said.

A positive aspect of the report was found in children’s experiences with prosecutors and judges, whose demeanour was largely praised by social services and legal aid staff as having improved over the past few years.

Nonetheless, the report indicated that judges often speak loudly and their gavel-banging can be frightening for children.

Ou Rasy, an undersecretary of state at the ministry of justice, attended the launch of the report and acknowledged that work must be done to strengthen the system to accommodate the needs of minors.

He said in a speech that “understanding the needs of children in the justice system is fundamental for officials in this sector.”

“I hope this report serves as a message for the implementation of activities related to the juvenile justice system,” Rasy said.

“This report is an accomplishment and meaningfully reflects the reform of the judicial system, leading us to further improve this judicial system to ensure justice and wellbeing for child victims, witnesses and all children in the kingdom of Cambodia.”